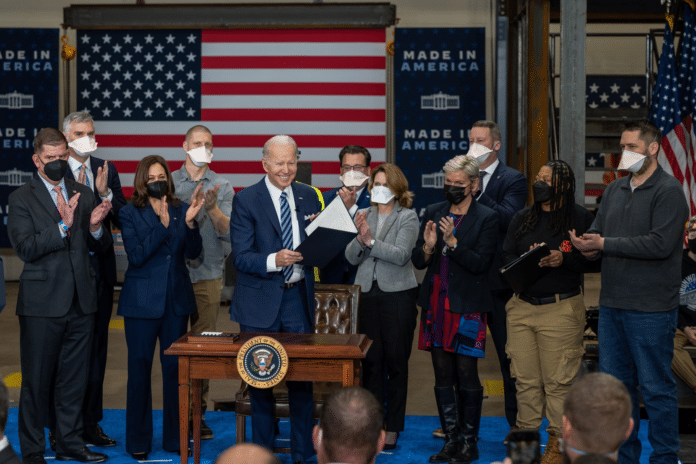 President Joe Biden on Feb. 3 signed an executive order requiring the use of project labor agreements (PLA)s on federal construction projects of $35 million or more.

The president and organized labor assert that the provision will help improve working conditions for nearly 200,000 construction workers on federal contracts. However, leaders of a some national construction associations say the pro-union order will increase costs, add to labor shortages, and unfairly bar many non-union contractors from worksites.

PLAs are collectively-bargained contracts between builders and labor organizations that establish terms and conditions for employment.

The White House says the order Biden will sign will streamline “coordination challenges” on large-scale projects, which will lead to projects being completed quicker, saving the government money. It also says the order will raise quality standards on federal projects by employing only highly-skilled and well-trained workers.

“It is hard to explain why the President would choose to impose government mandated project labor agreements to solve a problem that doesn’t exist,” said AGC CEO Stephen E. Sandherr.

“Construction workers are among some of the highest paid workers in the economy, earning ten percent more than the average worker in the U.S. Their pay rates have continued to climb 5.1 percent as labor shortages have made this a workers’ market.

“Government-mandated project labor agreements undermine the collective bargaining process by imposing a separate agreement in a specific region that applies only to a limited number of construction firms and unions. These imposed PLAs undercut the benefits of the collective bargaining agreements that were negotiated in good faith between employers and labor union and will likely prompt many firms to think twice about participating in the bargaining process in the future.

“Research has demonstrated that government-mandated PLAs increase construction costs by 12% to 20%, which results in fewer construction projects and improvements to roads, bridges, utilities, schools, affordable housing and clean energy projects—and the creation of fewer jobs,” said Brubeck. “PLAs steer contracts to unionized contractors and workers at the expense of the best-quality nonunion contractors and workers who want to compete fairly at a price best for taxpayers.

“PLA mandates are bad public policy because they effectively exclude the nearly 9 out of 10 U.S. construction workers who choose not to join a union from building taxpayer-funded construction projects,” said Brubeck. “These controversial agreements hold a third of employees’ compensation for ransom unless they join a union, pay union fees and prop up struggling union pension plans. PLAs also create excessive cost burdens and risks for high-performing nonunion contractors, which built more than half of the federal government’s large-scale construction projects during the past decade and are more likely to be small, women- and/or minority-owned businesses.

“Because 87.4% of the construction workforce does not belong to a union and the construction industry faced a skilled labor shortage of 430,000 people in 2021 alone, the Biden administration would be best served by promoting inclusive, win-win policies that welcome all of America’s construction industry to realize the potential of the recently passed Infrastructure Investment and Jobs Act to rebuild our nation’s crumbling infrastructure, increase accountability and competition and reduce waste and favoritism in the procurement of public works projects,” said Brubeck.