There’s a dire need for infrastructure spending in theU.S., according to Business Insider. Unemployment in the construction industry remained elevated, ending 2012 at 13.5 percent.  As well, Americans continue to drive over structurally deficient bridges every day.

A study performed by the American Society of Civil Engineers quantifies the effects of putting off much-needed investments toU.S.infrastructure.  The report finds that the failure to invest an additional $157 billion above current levels per year for infrastructure would lead to $3.1 trillion in lost GDP and 3.5 million job cuts through 2020.   The study’s authors explain how a country that under invests in infrastructure pays an economic toll in the future:

Businesses and households face higher costs due to several factors, including unreliable transportation services, less reliable water and electricity services, and unmet maintenance needs and outdated facilities for airports, marine ports, and inland water- ways. These costs absorb funds from businesses that would otherwise be directed to investment or research and development, and funds from households that would go toward discretionary consumer purchases.

Other studies have shown each dollar of infrastructure spending increases GDP by at least $2, a very impressive fiscal multiplier.  Read More.

Soldier to electrician: The path to your new career starts with Griffin Electric 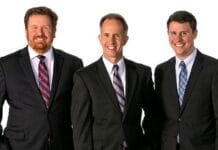 NC lien law update: The rules are about to change

Subcontractors concerned about lack of payment assurances on P3 projects