Associated Builders and Contractors (ABC) reports that its Construction Backlog Indicator remained unchanged at 8.5 months in July, according to an ABC member survey conducted July 20-Aug. 2, up 0.7 months from July 2020. 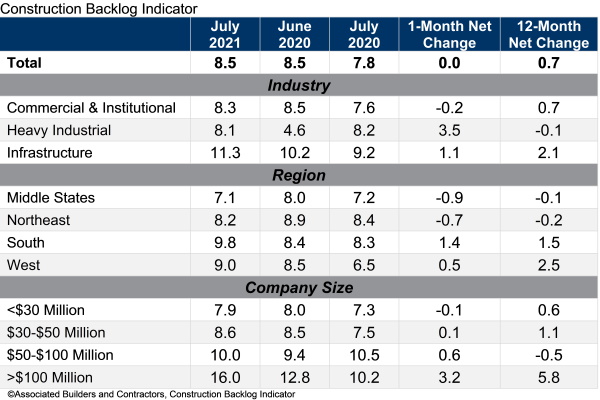 ABC’s Construction Confidence Index readings for sales, profit margins and staffing levels all fell modestly in July but remain above the threshold of 50, indicating expectations of growth over the next six months.

“The latest contractor survey results appear to reflect a dose of reality,” said ABC Chief Economist Anirban Basu. “For several months, contractors have been signaling all systems go despite rising materials prices, expanding labor shortages and costs and the lingering pandemic. While contractors continue to believe that the next six months will see rising sales, staffing and margins, the level of confidence has become slightly less sanguine as backlog failed to expand in July. 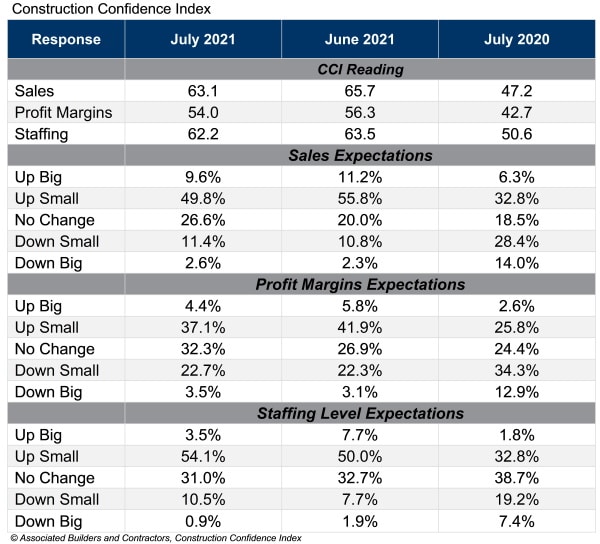 “It remains the case that many purchasers of construction services are contemplating delaying project start dates in hopes of securing more favorable bids at some point in the future,” said Basu. “Despite that, backlog remains well above pandemic lows. Not only is the broader economy continuing to recover, but massive ongoing injections of liquidity and stimulus mean that investors are flush with cash. One way to deploy cash is to invest in real estate, whether purchasing existing structures in need of refurbishment or engaging in new construction. These large pools of liquidity help explain the elevated levels of demand for nonresidential construction services during a period of rising costs. That in turn helps explain the confidence that many contractors continue to exude despite multiple commercial challenges.

“There is at least one other factor that has helped to stimulate contractor confidence,” said Basu. “A number of survey respondents indicated that they are observing less competition for projects. Many firms appear to have reached their capacity limits, and therefore are not able to bid on significant numbers of projects. At the individual firm level, the lack of substantial competition is consistent with stable or rising backlog. At the industry level, it is consistent with a lack of nonresidential construction spending growth as supply constraints make their mark. With firms racing to bolster delivery capacity, wages are predictably rising as contractors compete vigorously for talent. More than 75% of respondents expect to raise wages over the next six months.”