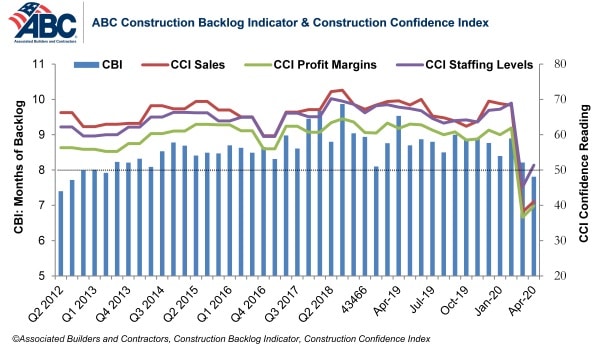 Associated Builders and Contractors (ABC) says its Construction Backlog Indicator fell to 7.8 months in April, the series’ lowest reading since the third quarter of 2012. Based on an ABC member survey conducted April 20-May 4, the results indicate that confidence among U.S. construction industry leaders inched higher last month compared to the historically low levels observed in the March survey.

Nonresidential construction backlog is down 0.4 months compared to the March 2020 ABC survey and 1.7 months from April 2019. Backlog has declined year-over-year in every industry classification, region and company size. Backlog in the infrastructure category has been stable, however, and reached its highest level since December 2019. 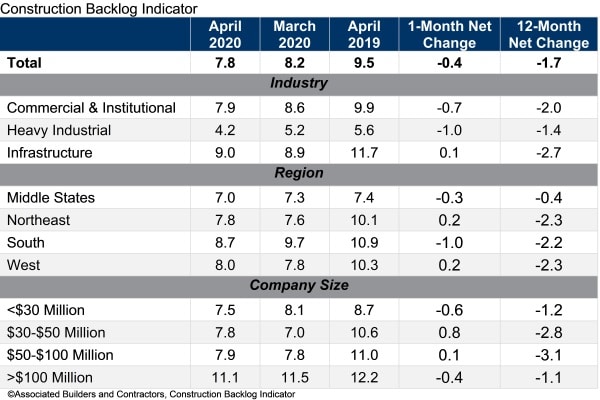 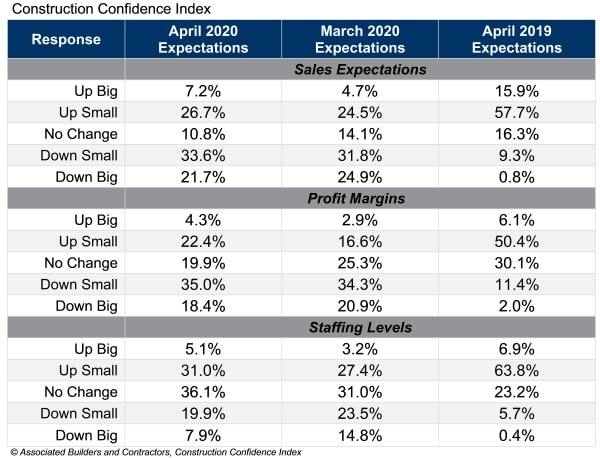 “Backlog has not been quite the protective shield that it normally is during the early stages of an economic downturn,” said ABC Chief Economist Anirban Basu. “These survey data indicate that only 30% of nonresidential contractors have enjoyed uninterrupted work flows recently. Roughly two in five contractors indicate that their work has been interrupted by government mandate. Other sources of interruption to construction projects include labor force issues as well as a lack of personal protective equipment and/or key construction inputs.

“Given the large quantity of businesses that will likely not survive the public health and economic crisis, demand for construction services could be suppressed for quite some time,” said Basu. “Vacant storefronts, empty office suites and shattered state and local government finances do not serve as a solid foundation for robust demand for construction services. For construction activity to rebound briskly, the federal government is going to have to step forward and provide substantial assistance to state and local governments, including to finance infrastructure improvements.”

Note: The reference months for the Construction Backlog Indicator and Construction Confidence Index data series were revised on May 12 to better reflect the survey period. CBI quantifies the previous month’s work under contract based on the latest financials available, while CCI measures contractors’ outlook for the next six months.