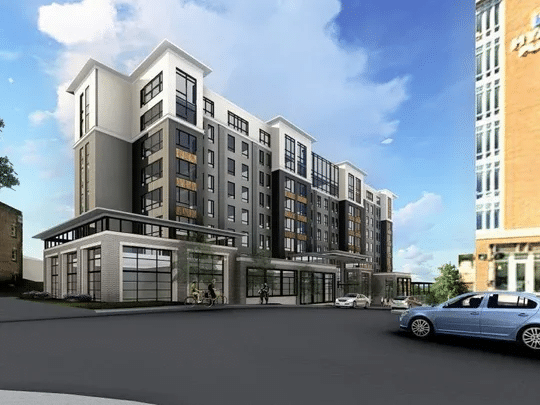 The City of Asheville and a Raleigh development company have spent nearly $500,000 in a legal fight over the construction of a downtown hotel, according city records and the company, Parks Hospitality Group (PHG), The Asheville Citizen Times reports.

The city ultimately lost the battle to stop the construction of the Embassy Suites at 192 Haywood St., with the NC Supreme Court ruling April 3 that PHG had the right to a building permit, the published report says.

Despite the Covid-19 pandemic, the developer says it is currently taking bids for the $40 million project. Construction is expected to start in July and and to take 16 months. The price is much higher than the original $24 million estimate.  Patel said, despite the national financial downturn, the company hasn’t seen a reduction in building prices.

The planed eight-story hotel is on the site of the former sheriff’s office.

City council decided to reject the planned eight-story hotel in 2017 “amid widespread public pushback over the growing number of tourists and hotels,” the newspaper reported..”Since that time, the council put in place a year-long ban on new hotel permits, ending in September.”

The city spent $212,925 from August 2018 to April 6 of this year on legal costs, a public records request by PHG confirmed by the Citizen Times showed. City staff said most of the money went to Poyner Spruill, a law firm with offices in Charlotte, Raleigh, Rocky Mount and Southern Pines. A small portion, $7,515, went to expenses such as filing fees and legal research

“In statements on April 3 and May 11 Patel called the fight a waste of private and public funds,” the Citizen-Times reported. “He attacked Mayor Esther Manheimer, saying it was she who ‘misled’ the City Council into appealing the case and to decline a $4.1 million settlement offer.”

“This wasn’t a question of whether Asheville needed more hotels or not, it was an argument of the rights of a land owner,” Patel was quoted as saying. “I’m happy we prevailed and set the record straight for generations to come in the great State of North Carolina.”

In her emailed statement to the Citizen Times copied to other city officials, Manheimer said the council unanimously agreed litigation in this case was warranted.

But Councilman Vijay Kapoor responded in an email that the decision wasn’t unanimous. Kapoor said in a March 28 closed session he and one of the other seven council members voted to accept the settlement. The city handled most of its own litigation up until the Supreme Court, he said, so costs were relatively low until then.

Kapoor said the settlement included $2 million for the city’s affordable housing fund and $1 million to the WNC Community Foundation, an umbrella nonprofit that gives grants to other charities.

“I thought the benefit from the offer far outweighed risking a potential loss at the NC Supreme Court.”