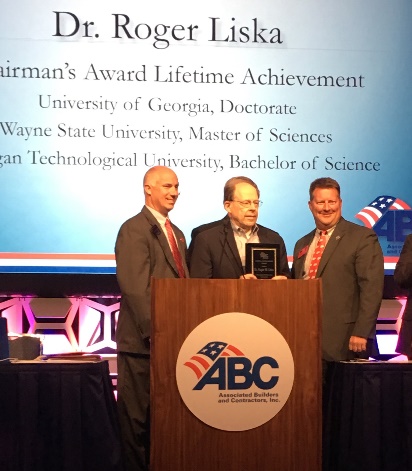 The Associated Builders and Contractors (ABC) has recognized a long-standing industry leader, as well as a North Carolina contractor, with national awards.

“We are proud to recognize Dr. Liska for his many years of supporting the industry,” said Doug Carlson, ABC president and CEO. “Education, training and getting young people interested in our industry have been a passion for his entire career. Dr. Liska is Mr. Construction in our industry.”

The Chairman’s Lifetime Achievement Award has only been given to a select few over ABC’s 66 year history. “Dr. Liska’s 13 page resume is an incredible testament to what he has done for the industry throughout his entire career,” says Carlson.

As well, ABC announced that it has named David Allen Company of Raleigh, N.C., its 2015 Contractor of the Year. Art Odom, president of the company, accepted ABC’s highest honor at the 26th annual Excellence in Construction Awards gala on March 2 in Fort Lauderdale, FL.

“David Allen Company has a well-deserved reputation as a leader in innovative and high-quality craftsmanship throughout the construction and design industries, and I am thrilled to honor them as ABC Contractor of the Year,” said David Chapin, 2016 national chair of ABC and president of Willmar Electric Service, Lincoln, NE. “The company demonstrates an impressive commitment not only to spectacular finished products, but also to industry-leading safety and professional development practices.”

Founded in 1920, David Allen Company has grown to become one of the nation’s largest marble, granite, terrazzo, tile and underlayment contractors, with nearly 500 employees and craft professionals at its offices in Birmingham, Ala., Columbia, S.C., Miami and Washington, D.C. In 2015, David Allen Company achieved ABC’s Safety Training Evaluation Process Platinum status and boasts an exceptionally low Experience Modification Rate of 0.63, signaling it is among the safest construction companies in the United States.

David Allen Company demonstrates a commitment to the community through initiatives including awarding an annual scholarship to a student at the North Carolina State University College of Architecture and hosting a golf tournament that has supported both the National Multiple Sclerosis Society and Paralyzed American Veterans, ABC said in its award announcement

The company also received an Excellence in Construction Pyramid Award for its work on the Grandview Medical Center in Birmingham, Ala., during the gala.

The ABC Contractor of the Year Award recognizes an exceptional individual or company in the construction industry for leadership in training, behavior-based safety, prefabrication and lean processes and commitment to the merit shop philosophy. The award is presented annually at the Excellence in Construction Awards gala during ABC Workforce Week.