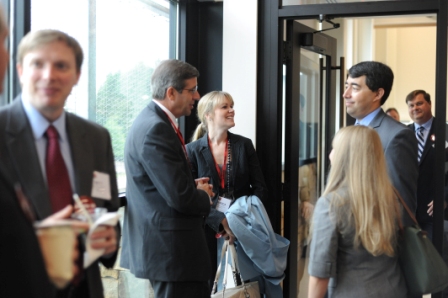 Carolinas AGC (CAGC) members visited with North Carolina General Assembly members June 6 to promote infrastructure funding and better payment procedures for the construction industry, limit and sunset the cap on gas tax, and oppose legislation that would make it difficult to file suit against construction designers.

“We have been there for the construction industry and for business–and we will continue to be there for you,” said Folwell, R-Forsyth.

Pryor Gibson, senior advisor for governmental affairs to Gov. Beverly Perdue, told nearly 50 attendees that it is important for CAGC members to be involved in the political process and in keeping close contact with the local House and Senate members about construction industry hot buttons. “The legislators want–and need–to hear from you about things such as construction funding and your high unemployment rate, as well as how construction helps fuel the economy,” Gibson said.

After being briefed from CAGC staff about legislative issues, CAGC members met with state lawmakers, including Sen. Bill Rabon. “I really appreciate the support of Carolinas AGC and the construction industry as we try to help manage the transportation budget in the NC General Assembly,” Rabon, R-Brunswick, told CAGC members.

Support capping the gas tax at no less than 37.5 cents. While CAGC prefers no cap, this compromise amount over the next year hopefully will result in more infrastructure funding via tax modernization efforts.

Support as much as possible infrastructure (building, highway, utility) funding at a time when the construction industry’s unemployment rate is around 20 percent. Each $1 billion spent in construction creates or sustains 28,500 jobs and bolsters North Carolina’s economy.

Support of H 1052 (Rep. Stevens) and S 864 (Sen. Brunstetter), Mechanics Liens/Payment Bond Reforms, at a time when bankruptcy protection is needed and contractors are paying out large sums for the same work or materials.

Oppose Senate Bill 435 (Certificate of Merit in Malpractice Claims Against Design Professionals), which would have a chilling effect on the construction industry in its ability to seek legal relief against designers at a time when there already is relatively little construction work available.

Support of ongoing efforts to improve underground safety, in comprehensive legislation next year, to better protect the public, the construction industry and utility operators/owners.

Following a luncheon at the AIA NC headquarters, CAGC led a discussion with 25 construction and design representatives with title insurer and banking lobbyists concerning ongoing efforts to make revisions to existing lien laws.

“Visiting the Legislature for the CAGC’s NC Legislative Day reaffirmed to me how important our organization is to the construction industry. We are helping shape laws that will foster and help improve our industry. In these economic times it is imperative that we stay engaged on what is affecting our industry,” commented CAGC member Ken Gerrard of T.A. Loving, Goldsboro, NC.

Carolinas AGC represents contractors and construction-related firms in North Carolina and South Carolina, and serves as a chapter of AGC of America and ARTBA. Read More.