Despite the sudden and dramatic industry contraction caused by COVID-19 in the spring, North Carolina construction industry and government officials are optimistic that the resources will be in place for recovery – even if the state is hit by additional devastating storms in the next few months.

Political and public officials including representatives from the North Carolina Department of Transportation (NCDOT), House Speaker Tim Moore and North Carolina Gov. Roy Cooper offered optimistic insights at the annual Carolinas Associated General Contractors of North Carolina (CAGC) Virtual Summit on July 31. This year, because of COVID-19, the association’s annual summit, which attracted more than 600 members, was held online with video and audio links for the speakers’ presentations.

“Our agency was looking at about a $300 million shortfall for our fiscal year that just ended,” said Boyette. This caused a crisis, because there is a legislative “cash floor”, below which work must stop. “We fell below that floor for the first time in history” in April, he said.

“But the good news is we are above that floor now,” Boyette said. “We have worked very hard to ensure that our accounts payable balances are being paid,” he said.

“We worked hard with our partners at the General Assembly and with our partners in the industry to do what we can do to minimize expenses” — including furloughing some staff.
Looking forward, the NCDOT is working to rejig its financing and reserves, freeing up money – as gas tax revenues have rebounded with the return to nearer-normal highway traffic.

NCDOT COO Bobby Lewis indicated he is hopeful that millions of dollars in additional funds will become available through new bond-funded projects (cheap at current interest rates) as well as federally supported stimulus funds, giving the department resources to keep its projects current, payments to contractors on time, and provide coverage for additional weather-related disasters. With stimulus funds, there could be room for growth as well.

House Speaker Tim Moore described the challenges affecting the legislature and the failure to approve a state budget because of legislative impasses between the State House, Senate and Governor (the state is currently operating under a ‘continuing resolution’ for its finances.)

However, despite these problems – and a shortfall of about $4 billion from the current $23 billion continuing resolution funding – Moore says North Carolina is faring far better than many other states.

“We had savings reserves to be able to fund things, essentially, if a rainy day showed up, and this is a rainy day,” Moore said.

He said he would like to work to get a bond in place to fund additional construction projects. “North Carolina has sufficient debt capacity,” he said. “We have excellent credit and interest rates right now are the lowest in any of our lifetimes. It’s almost like you’re being paid to take the money.”

Gov. Roy Cooper said he thinks it is important to figure out long-term and stable funding for highway and other infrastructure projects in the state.

“We know the gas tax is not going to be a stable revenue source for investment and public infrastructure” as more and more vehicles are electric and don’t use gas. He said he is looking forward to a vote for “strategic long term infrastructure.”

“I’d like to ask your support for several things,” Cooper said. One is trying to push Congress and the President for a strong public infrastructure for our state and for other states throughout the country.

“Second, here in North Carolina, I’m a strong supporter of a bond to build public schools, community colleges, buildings, public university buildings, as well as water and sewer and broadband internet for rural areas,” Cooper said. “We’re not going to see interest rates this low again and it’s time to take advantage of that.

“I was disappointed we could not get the package to pass through the General Assembly this time. “These are investments that we need.”

Economist Mike Walden painted a picture that showed the severity and suddenness of the recession and job losses caused by COVID-19, and suggested there won’t be a full recovery until 2023.

However he said the drastic economic and shutdown measures are worthwhile because of lives that can be saved. “In March and April, maybe about 30 to 490 per cent of economy shut down and that cost the economy about $50 billion each month.” But if you measure the amount of money that could be earned because people stayed alive, that would be “worth about $8 trillion,” he said.

“This is the bottom and we’re going to grow out of this,” he said.

Longer-term, the economist said we can expect more people to be working remotely, and “we’re going to revisit globalization” especially to ensure back-ups to produce medical supplies. 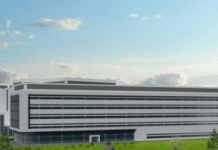 Fujifilm and Google to bring new jobs, new construction — and a housing shortage — to the Triangle