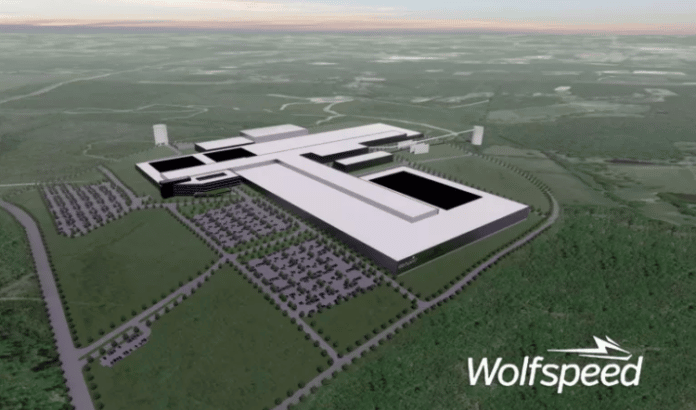 Wolfspeed Inc., a Durham-based manufacturer of Silicon Carbide semiconductors, will build a $5 billion manufacturing campus over the next eight years in Chatham County

“Wolfspeed’s decision further validates North Carolina as the epicenter of clean energy,” said Governor Roy Cooper. “This is another milestone in our drive toward a clean energy economy as it will boost electric vehicle manufacturing and offshore wind while fighting climate change and putting money in the pockets of every day North Carolinians with great paying jobs.”

Wolfspeed is the global leader in the production of Silicon Carbide materials and devices which support technology used in a variety of applications including electric vehicles, 5G networks, and renewable energy and storage.

The company’s expansion at the Chatham-Siler City Advanced Manufacturing Site will produce the Silicon Carbide materials to make semiconductor chips and devices that power electric vehicle inverters and charging systems.

“We are particularly excited and proud to not only expand Wolfspeed’s footprint in our home state of North Carolina, but also our relationship with North Carolina Agricultural and Technical State University to develop a workforce of the future,” Wolfspeed president and CEO Gregg Lowe said in a statement.

The project will be partially funded by a high-yield job development investment grant (JDIG) approved by the state’s economic investment committee.

Additional funding was also approved to help with final site preparations at the Chatham-Siler City Advanced Manufacturing Site, including a $57.5 million appropriation to the Department of Commerce to be used for site preparation.

To qualify for the budget’s incentive, Wolfspeed must invest at least $4.8 billion in the county and create those 1,800 jobs.