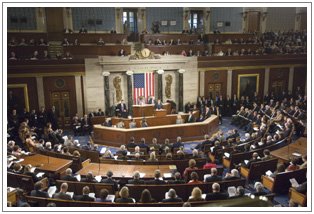 The election is over and we still have a divided Congress and impending “fiscal cliff.” So what can the construction industry expect during Congress’ lame-duck session, and next year? That was the topic of a conference call last week with members of the Associated General Contractors of America.

Post-election numbers show a slightly smaller Republican majority in the House and a slightly stronger Democratic majority in the Senate, said Jeff Shoaf, senior executive director of government and public affairs at AGC. This translates into either party facing difficulty if they try to move major legislation without garnering bipartisan support.

The fiscal cliff is the No. 1 issue.  If it is not dealt with, the country faces $109 billion being slashed from federal defense and nondefense programs Jan. 2. AGC estimates that this could mean about $6 billion less in federal construction spending, said Jimmy Christianson, AGC’s director of congressional relations/PAC.

There is less than 50% chance Congress will deal with fiscal cliff, Shoaf said. “We think they need a full year to deal with it all.” He suggested the possibility of pushing sequestration back for a year and then taking the year to get “the policy right, a good bipartisan package to give the economy some confidence.”

There were about 380 ballot issues across the country that looked for billions in bond issues. This is significantly fewer than in the 2007 election cycle, but there were big winners in school construction, highway construction and transportation and water and sewer upgrades, AGC said. In all, local voters approved $122 billion for these infrastructure upgrades. “This proves the closer the money is to the project, the better chance the public will support the project,” said Steve Sandherr, CEO and president of AGC.

In addition, if Rep. William “Bill” Shuster, who announced his candidacy for chairmanship of the House Transportation and Infrastructure Committee, is elected, that’s good news, said O’Neill. “Shuster is a friend of the industry,” O’Neill said. Shuster is “anticipated to run the committee in positive way,” he added. “But it will be difficult for him to operate in a bipartisan way because the House doesn’t work that way anymore.”

Immigration, health care, union organizing and project labor agreements are all on the horizon, AGC says.  Expect to see renewed effort by President Barack Obama on immigration reform, says Jim Young, AGC’s director of strategic communications and congressional relations. Young doesn’t see much of a chance for a comprehensive bill, but rather for smaller pieces, such as making visa programs more amendable.

“Obamacare is the law of land for the foreseeable future,” Young said. However, he does see continuing attempts to “pick off parts of the law that won’t work,” which is how the 1099 piece was repealed earlier this year.

Expect to see the government continue to push for project labor agreements, said Christianson. PLAs requires contractors to negotiate a collective bargaining agreement with one or more labor unions for specific projects and can negatively affect smaller businesses and costs to the project.

Although the Environmental Protection Agency deferred some of its proposed regulations, we can expect to see them come to the front now that the election is over. Particular issues likely to come up next year, according to O’Neill and Scott Berry, AGC’s director of the municipal and utilities division of government and public affairs, include:

•Debate on regulating fly ash as a hazardous waste.

•A court decision on the agency’s stormwater effluent limitation guidelines.

Sandherr sees the lame-duck session giving AGC “an opportunity to lay the ground work on issues important to the construction industry.” However, he expressed concern over the narrowness of control in House and Senate. Read More.