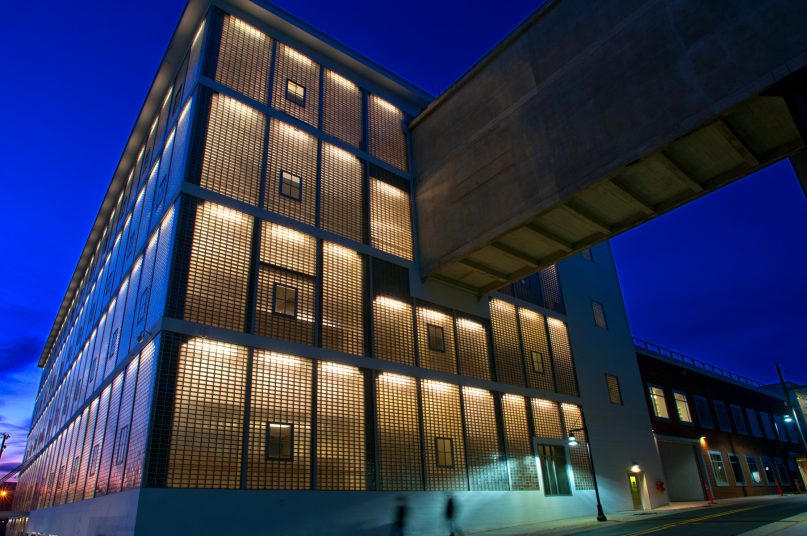 The mid-February sun pours through the atrium of the gleaming 242,000-square-foot building in downtown Winston-Salem, illuminating and warming the crowd taking the grand tour of one of the newest example of public-private partnerships in North Carolina. Wake Forest BioTech Place is so new it still glistens in that unseasonably bright sunshine, the diamond in a setting littered by factories and other buildings that once were part of the R.J. Reynolds Tobacco Co. campus that dominated the city.

The $100 million building is part of Piedmont Triad Research Park and has been in the works in some form or another since the park began being developed in 1992. About 450 people will work in the building by the middle of next year. The largest tenant, with about 350 of the employees, is the Wake Forest University School of Medicine, which has moved its departments of biochemistry, biomedical engineering, microbiology and immunology, and physiology/pharmacology into the new surrounds. Other tenants include Allegacy Federal Credit Union, Carolina Liquid Chemistries and a business incubator.

The project was put together by Wake Forest Baptist Medical Center, Baltimore-based developer and owner Wexford Science and Technology, which specializes in research buildings, and strong economic and community support from Winston-Salem, Forsyth County, the state of North Carolina and the federal government. The project was made possible through the state Mill Tax Credits program and federal New Market and Historic Tax Credits totaling about $34 million. The city and county also joined forces to split the cost of $6.2 million in infrastructure upgrades. Dan Cramer, executive vice president for Wexford, says those credits were vital to the company signing on for the project in 2009. “We all came in knowing there were credits available,” he says. “There’s no way we could do this project without this.”

Retrofitting of the two former Reynolds warehouses began in 2010 and took about 18 months. Both buildings were stripped to the basic building structure on the interior and refitted with new mechanical, HVAC and electrical systems, fire protection and vertical transportation systems to bring them up to current commercial code standards. More than 1,400 people worked on the project, with about 75 percent of that total coming from local contractors and subcontractors.  “The new facility is a wonderful example of the benefits of public-private partnerships designed to breathe new life into once blighted areas,” says Doug Edgeton, president of the park.

Public-private partnerships, in which the government contributes resources – land, money or tax breaks to encourage development and the private partner also contributes to financing, could do more across the state, and contractors are pushing the state for more advances in the process. It’s not just a handout. The developments contribute long- and short-term growth in employment, and they also increase the tax value of blighted property.

The city of Durham has benefited from the development of Durham Bulls Athletic Park, the renovation of the American Tobacco Co. campus and other projects. Durham has invested about $270 million in public funds in the project but attracted $450 million in private investment. Meanwhile downtown employment has increased from about 3,800 in 1995 to more than 14,000 now. Kevin Dick, director of the city’s Office of Economic and Workforce Development, says it was an easy decision to back the projects. “If government doesn’t get involved in these economic-development projects, it doesn’t happen.”

A similar public-private partnership recently was completed in Charlotte. Earlier this year, Concorde Construction Co. completed the renovation of the Belvedere Theater building in theQueen City into Belvedere Family Dentistry. The theater was built in the 1950s and for many years was the centerpiece for the area that is now called the Greenway Business Center, a 30-acre business park. Concorde worked with the Charlotte Mecklenburg Development Corp. on the project.

As with the efforts in the other two regions, the Charlotte project is expected to rejuvenate a part of the city that had been left behind by progress in other areas. Some contractors in the state welcome the opportunity to work on such projects, particularly during the economic downturn, when purely private projects often have trouble finding financing.  A key to the PPPs, some contractors say, is that they do create new funding sources, such as toll roads and parking decks, that they provide for a level playing field for those interested in the construction work and that the construction work otherwise would not have been done.

Perry Safran, founder of the Raleigh-based Safran Law Offices , is a backer of the partnerships and hopes they will be expanded. “The key here is successful projects will lead to more opportunity — and government does not have to be the leader, but the process needs more flexibility,” Safran says.

That’s something everyone agrees on. Where the disagreement comes is in how to provide the flexibility.

The General Assembly has been considering a massive rewrite of the state’s laws governing public-private partnerships with some lawmakers looking to a model adopted in neighboring Virginia.

Dave Simpson, who handles N.C. government relations and is the building director for the Carolinas AGC (Associated General Contractors), says the association is wary about change. “We like the idea of public-private construction—if you’re talking about construction that otherwise would not be undertaken, there is a level playing field for bidders, since you are asking about public funds, and both sides have financial stakes in the project—that is the private entity provides for financing other than just tapping existing revenues.” However, he says, “We continue to have concerns about making sure there’s a level playing field for all qualified people in the construction industry.”

In particular, he says, he’s concerned that the Virginia model allows for unsolicited bids, in which a contractors can propose unsolicited projects that they’ve been preparing for months, giving other companies only 60 days to prepare and submit a competing proposal. “You’re talking about less transparency, because there’s no sealed bids.”

Moreover, Simpson says, any changes in the law won’t solve the overriding problem – a lack of money for public projects in general. He said previous proposed legislation would allow for another delivery method, in this case design-build, when the focus should be on getting new revenues for design and construction. “We need funding,” he says. “There is probably $10 billion in infrastructure needs out there. The UNC system says it needs $3 billion by itself. The General Assembly has approved $120 million for infrastructure needs for the state; it is a proverbial drop in the bucket—and even that money is being withheld because of budget issues.”

Legislative experts don’t expect the Virginia model to pass this year, but there could be tweaks in the process. Simpson just hopes that the changes will include more money for public projects. “We’ll continue to monitor the situation very carefully,” he says. We’d be having our heads in the sand if we acted like there were enough private projects out there now.” Read More.