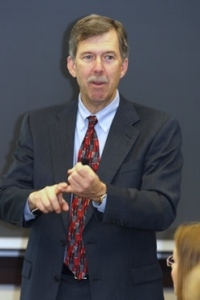 News & Observer reports that an aging labor force and a deceleration in the housing market will likely slow the economy in North Carolina and elsewhere this year, UNC Charlotte economist John Connaughton said.

In his latest quarterly forecast for the state’s economy, Connaughton said signs point to a slight economic slowdown in North Carolina.

Connaughton said North Carolina’s gross state product – a measure of the production of goods and services – is expected to increase by an inflation-adjusted rate of 1.9 percent this year. That’s lower than his previous forecast of 3 percent growth.

He pointed to a slowdown in home sales and prices in the past two months as a worrisome indicator for the state’s economy. Recent weakness in the U.S. housing market has also become a concern for economists and officials with the Federal Reserve.

Older workers leaving the work force are also expected to be a drag on the economy, Connaughton said. That’s because retired baby boomers are expected to slash their spending, reducing overall consumption, he said.