Samet Corp, Greensboro, has named Rick Davenport to be President of the companyâ€™s construction division. He replaces Ron Rothrock, who had been in that position since 1986. Rothrock moves to a new position, Executive Vice President of Business Development.

Thomas, Knight, Trent, King and Company announced John H. Wagstaff, CPA has joined the accounting firm as a Shareholder. He will serve clients from the headquarters in Durham and the Roxboro office.

Joseph Angell was hired as program manager in the Raleigh office for Vanasse Hangen Brustlinâ€™s U.S. Department of Defense services. The Watertown, MA based company specializes in transportation, land development and environmental services.

Balfour Beatty Construction U.S. announced it has named John F. Woodcock President of the Carolinas Division. The company also announced that Robert B. Hambright will retire as chief executive officer of the companyâ€™s Southeast Division effective March 31. With more than 300 employees and offices in Charlotte, Raleigh and Greensboro, the Carolinas Division serves a diverse mix of private and public sector clients.

Raleigh-based R.W. Moore Equipment Company announced the promotion of Will Massengill as General Sales Manager. Massengill is replacing Alex Bullard who has been appointed as General Service Manager.

Winston-Salem based Shelco Inc., announced that Barry W. Gardner has been named Executive Vice President and Chief Marketing Officer. The general contractor has other offices in Raleigh, Charlotte and Greenville, SC.

Lyle Gardner of Raleigh has been named president of the NC Home Builders Association. Gardner is founder and owner of two building companies, Spectrum Homes and Evergreen Construction Company.

Women in Construction Week (WIC) will be celebrated March 7-13. WIC Week provides a unified time for more than 5,500 members of the National Association of Women in Construction (NAWIC) to raise awareness of the opportunities the construction industry holds for potential employees and to highlight women as a visible, growing force in the industry. Samantha Hedgepath, ECS Limited, Greensboro, said the Piedmont Chapter of NAWIC will be hosting charitable work-day events an Award banquet, luncheons and hands-on workshops during the week.

Sepideh Asefnia, President of SEPI Engineering & Construction, Raleigh, has been appointed by Gov. Bev Perdue to the 2010 NC Economic Development Board. SEPI has a a corporate office in Raleigh and a branch office located in Charlotte.

Jeff Trussler has joined BBH Design in the Research Triangle as a project architect.

Geo. Raper & Son Inc. hired Stephen McFarland. He will focus on commercial construction operations and management. The corporate and building division is located in Raleigh. The utility-water/sewer division is in Elizabeth City.

Raleigh-based architectural firm, BJAC, hired Nancy Padgett as Marketing Director. Barbara Dokulil has joined the firm as an Interior Designer.Â  Michelle McNutt has become a registered architect at the firm. BJAC also has offices in Charlotte.

Aptcon, a specialized provider of construction management and construction services, announced it had opened a new regional office in Wilmington.Â  The address is 310 N. Front Street, Suite 4-181. 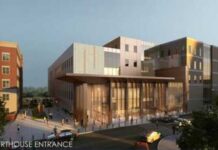