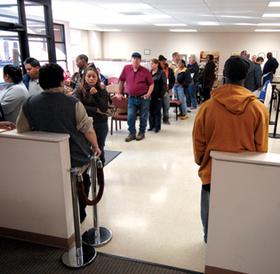 The Triad Business Journal reports the Triad region’s unemployment rate slipped to 9.1 percent in April from 9.6 percent in March, according to data released by the N.C. Department of Commerce. The region’s jobless rate was 10.2 percent in April of last year.

Unemployment dropped in all of the Triad’s metropolitan areas. Burlington’s 9 percent jobless rate fell by more than a percentage point from a month prior, while the Greensboro-High Point rate slipped to 9.3 percent from 9.8 percent in March. Winston-Salem’s unemployment dipped to 8.5 percent from 8.9 percent.

Statewide, unemployment rates fell in 93 counties, increased in three and held flat in four. The statewide unemployment rate is 9.4 percent.  The jobless rate declined in 11 of the Triad’s 12 counties, but rose in Montgomery County.

NC State University economist Mike Walden attempted to explained NC’s high unemployment rate in a recent issue of The Raleigh Telegram.  “Manufacturing is still much more important to North Carolina’s economy than it is for the average state. Almost 22 percent of our state’s economy (measured by the output of businesses) is based on manufacturing, compared to the national average of 13 percent. So clearly, one reason our job market took a big hit during the recession is because of what the downturn did to the manufacturing sector,” Walden said.

“It also appears North Carolina has imported some unemployment,” said Walden. Between 2008 and 2010, the net movement of households to North Carolina from other states was five times higher than the average for all states. Some of these new residents likely did not find jobs and therefore boosted our unemployment rolls.

So how much difference did these two factors — our heavier dependence on manufacturing and our greater attraction of moving households – make to the state’s jobless rate? Walden estimates North Carolina’s peak rate (11.4 percent) would have been 9.1 percent if these two factors had been the same as the average for all states.

“Does this mean manufacturing and newly arrived households are negatives for North Carolina,” Walden asked. “Certainly not,” he said, “because as economic growth returns they can fuel a faster recovery; indeed, we saw a stronger North Carolina economic rebound in the mid-2000s. But  these factors can have downsides on the backside of the business cycle.”  Read More.

PWC in Fayetteville encourages subcontractors to participate in $500 miliion capital...