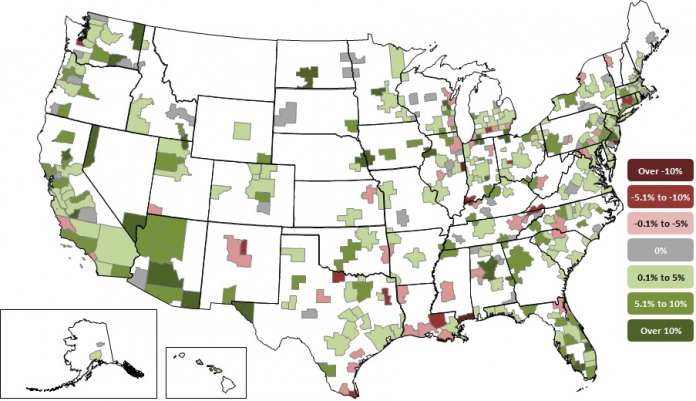 Most of North Carolina experienced a modest rate of construction employment growth in the past year, but some Triad communities grew while the employment in the Charlotte area declined, according to US Bureau of Labor Statistics data analyzed by the Associated General Contractors of America (AGCA).

The Asheville area reported an eight percent growth rate (an additional 800) jobs, though the data for it and other smaller market area including Winston-Salem also includes mining and logging work. Asheville’s growth put it in 40th place nationally, while Winston-Salem, with a 7 percent growth (700 additional workers) ranked 52.

On the other end of the spectrum, construction employment in Charlotte declined by 3 percent, with a loss of 1,900 employees to 62,600 workers — resulting in the third highest employment rate decline in the nation.

Detailed data is below.

Overall, AGCA reports that construction employment grew in 249 out of 358 metro areas between May 2018 and May 2019, declined in 57 and was unchanged in 52. Association officials said firms in many parts of the country would likely have added more workers if it were not for an acute shortage of qualified workers.

“Many of our member firms report they are having a hard time finding qualified workers to keep pace with demand for construction services,” said Stephen E. Sandherr, the association’s chief executive officer. “Even though firms are raising pay, boosting training and adding hiring incentives to recruit workers, many are still struggling to find as many employees as they need.”

“Instead of pushing every student into college, and college debt, Washington officials should make it easier for students to follow a debt-free path to high-paying construction careers,” Sandherr said. “And the Trump administration should reconsider its misguided decision to exclude the construction industry and its many thousands of available positions from its new apprenticeship program.”