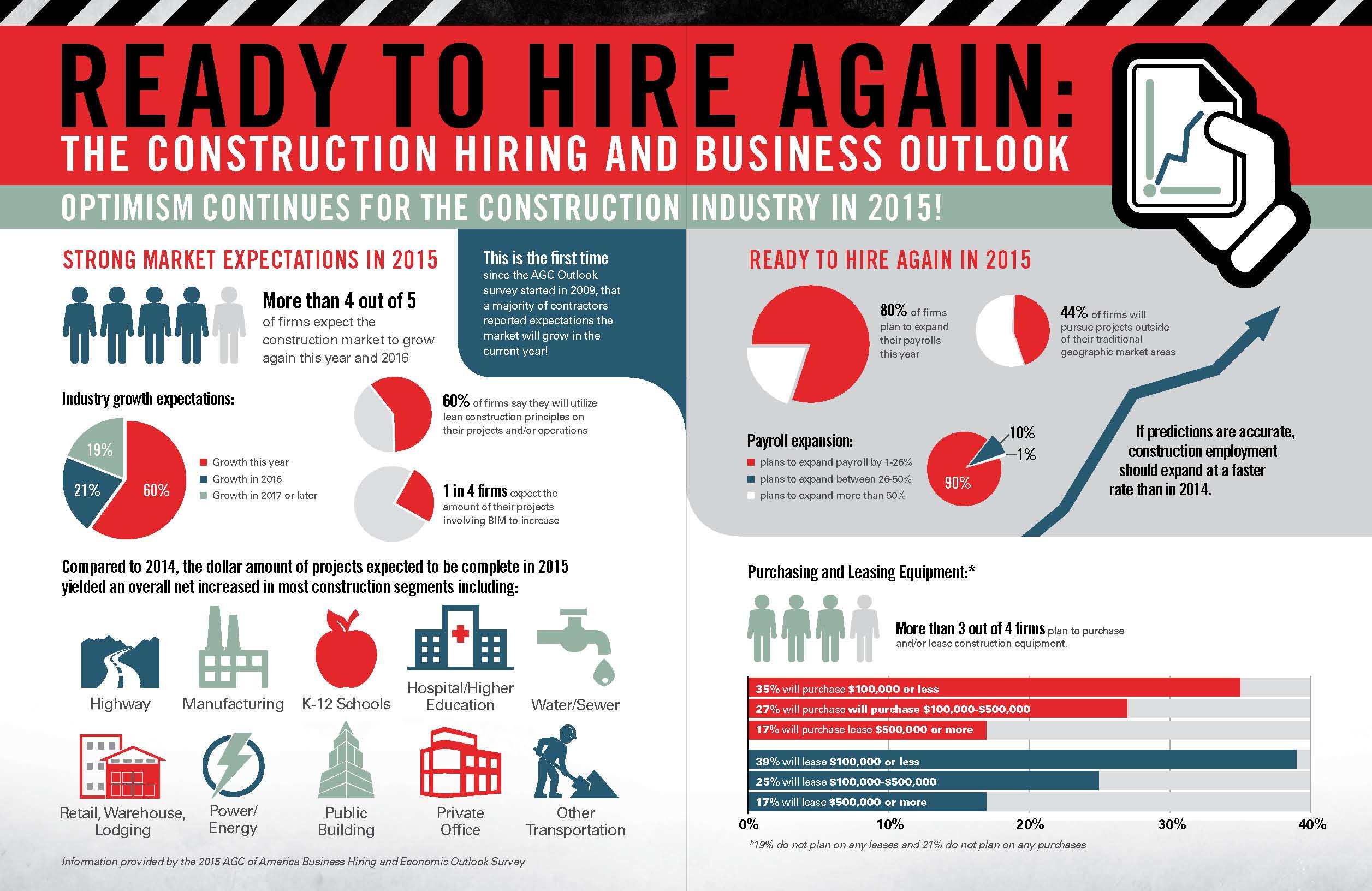 A new survey conducted by the Associated General Contractors of America reveals that 80 per cent of construction firms plan to expand their payrolls in 2015 while only 7 per cent expect to reduce headcounts.

The study indicates that most contractors are optimistic about the year ahead and ready to expand, but will have to cope with challenges including worker shortages and regulatory burdens. The survey was conducted as part of Ready to Hire Again: The 2015 Construction Industry Hiring and Business Outlook.

“Contractors are extremely optimistic about the outlook for 2015,” the association’s CEO Stephen E. Sandherr said in a statement. “Indeed, if their predictions prove true, industry employment could expand this year by the most in a decade.”

According to Sandherr, the number of firms planning to add employees – 80 per cent – in 2015, is significantly higher than in 2014, when only 57 per cent of firms report they added to their total headcount. However, many firms that plan to hire this year expect to make only modest increases, with 90 per cent of the firms that expect to add employees reporting they will expand by one-quarter or less this year.

At the same time, contractors are less optimistic about the outlook for marine construction and direct federal construction. Both for market segments rely almost exclusively on federal funding.

According to the survey, 79 per cent of firms are planning to purchase new construction equipment in 2015 and 81% plan to lease new equipment. Credit conditions appear to be less of a concern for contractors in 2015 as they were during the height of the downturn, according to the association officials.

“Despite the overall optimism, some challenges remain for the industry,” states Ken Simonson, the association’s chief economist. “In particular, as construction firms continue to expand, they will continue to have a difficult time finding enough skilled construction workers.”

Further, Sandherr says that large numbers of contractors are worried about the potential impact a number of proposed new federal regulations will have on their business operations. More than 70%of firms reported listed having Washington find ways to make it easier to prepare the next generation of skilled workers as a top priority. And, 60 per cent want Congress to reform the tax code, while 59 per cent want Congress to repeal all or part of the Affordable Care Act.

“With a little luck and a lot of effort, we will make sure the construction industry has the support it needs to continue expanding in 2015 and beyond,” Sandherr states.