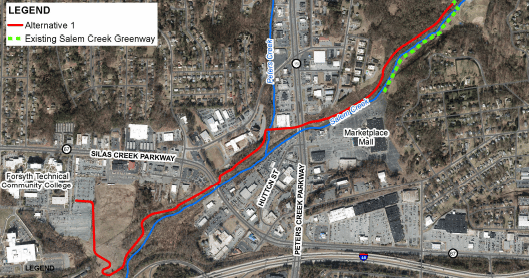 The City of Winston-Salem is considering options for extending Salem Creek Greenway from its current terminus at Marketplace Mall near Peters Creek Parkway to Forsyth Technical Community College.

A public input session will be held Feb. 2 from 5 to 6:30 p.m. to review four potential options at the Miller Park Community Center, 400 Leisure Lane.

Once constructed, the extension will expand access to additional resources adjacent to Peters Creek Parkway and Forsyth Technical Community College, including the Ardmore neighborhood.

Davenport has now completed the draft feasibility study with four possible alternatives to extend the trail.

Alternative 1A includes a pedestrian bridge over Peters Creek north of the Dynasty Furniture building. 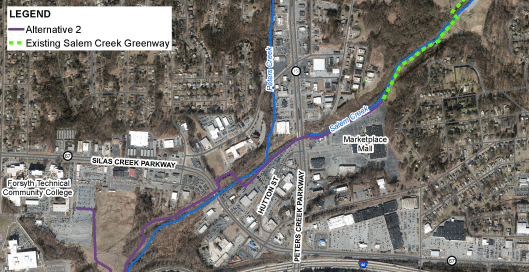 The project ispart of the proposed Primary Southern Urban Route of the Mountains-to-Sea Trail system, a state project that would connect the Great Smoky Mountains with the Outer Banks. The greenway also provides connectivity between Winston-Salem State University, Salem College, Old Salem, and YWCA.