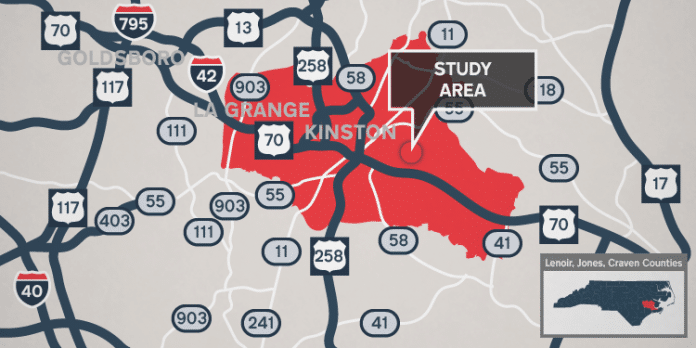 The North Carolina Department of Transportation has selected its preferred route for the future 22-mile U.S. 70 Kinston Bypass.

Alternative 1SB goes between the N.C. 903/ U.S. 70 interchange in La Grange and existing U.S. 70 east of Dover. The proposed Kinston Bypass would be a four-lane, median divided freeway (accessible via ramps at interchanges) that extends 22 miles from U.S. 70 near La Grange (in Lenoir County) to U.S. 70 near Dover (on the Jones-Craven county line).

With an estimated total cost of $379 million, the project has a design speed of 70 mph and, when complete, would help reduce traffic congestion and delays that currently exist along U.S. 70 in Lenoir, Jones and Craven counties.

A new interchange east of N.C. 148 would provide access to the shallow bypass section of the selected alternative, which would be parallel to existing U.S. 70 to the south on new location for approximately 6.5 miles.

Interchanges along the new location portion of selected route would be located at N.C. 11/N.C. 55, U.S. 258 (South Queen Street), and N.C. 58 (Trenton Highway). A new interchange east of Lenoir Community College would connect the shallow bypass back to existing U.S. 70.

The bypass would follow existing U.S. 70 from this interchange eastern end of the project near Dover and would upgrade U.S. 70 to a full control of access highway with interchanges at Wyse Fork /Caswell Station roads and Old U.S. 70 (West Kornegay Street) in Dover.

After several public meetings, this route was selected based on it having the most public support, shortest project length, least amount of projected wetland impacts, highest projected net economic benefit, while also preserving the rural character of southern Lenoir County.

The next steps for the project include the development of more detailed designs. The public can expect a final environmental impact statement and a record of decision in 2021. Right-of-way acquisition is scheduled for 2023, with construction beginning in 2027.

When complete, the bypass, a four-lane median divided highway, would improve regional mobility, connectivity, and capacity for U.S. 70, reducing traffic congestion and delays that exist along U.S. 70 between La Grange and Dover.