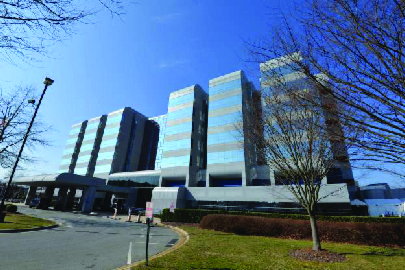 High Point Regional is the city’s largest center for medical care. With most of its power and utility infrastructure more than 30 years old, the hospital administration was concerned about a possible failure of the aging and strained mechanical, electrical, and HVAC systems.

Charlotte based architect McCulloch England Associates has worked with High Point Regional since the mid 80’s. McCulloch president Rich Henly said planned renovations and construction at High Point Regional over the next several years could not have been possible without a complete overhaul of the hospital’s power and HVAC systems.

According to Don Burroughs, associate vice-president of the Raleigh based Dewberry, the upgrades required constructing a building to house the emergency generators and electrical switchgear, along with a full renovation of the existing chiller plant.

High Point Regional chose Rentenbach Constructors, a subsidiary of the Christman Company, to upgrade the hospital’s power and HVAC infrastructure largely on the strength of the firm’s preconstruction planning proposal and healthcare expertise.

Essentially, Rentenbach was charged with the construction equivalent of a “full heart transplant.” The Greensboro based general contractor and its partners needed to keep the hospital “alive” and serving patients while its aging systems were changed out. Rentenbach senior project manager Wes Altman said “there was no room for error. The maintenance of the hospital’s utilities was quite literally a matter of life and death.”

The general contractor and design team collaborated on an exhaustive, multi-phased construction strategy and field logistics plan that left nothing to chance.

Rentenbach’s electrical systems planner Rob Egan conducted an exhaustive survey of the hospital’s power supply lines. He documented every circuit in order to develop a shutdown and temporary power branching strategy that integrated the construction schedule with the hospital’s need to be up and running without interruption.

The team worked directly with hospital staff to plan the exact moment of each power transfer, ensuring that each department was notified, and each room, individual, and affected piece of equipment was identified. Planning, coordination, and communication with the hospital worked so well that 55 major electrical shutdown/transfer operations were accomplished without any incidents, injuries, or equipment damage.

Complicating this operation was the presence of three, city-owned electrical transformers that sat within the footprint of the new energy plant addition. These transformers continued to supply energy to the existing plant. The project team coordinated with city utilities’ workers, subcontractors, and hospital facilities personnel to relocate the transformers.

“The transformers were mounted on concrete pads directly in the footprint of what was to become the new central energy plant building addition,” said Egan. These transformers delivered power to the existing energy plant and had to be fully relocated without any long-term shutdowns.

“The hospital was unsure of how this could be done, if it could be done at all,” he said. Working with the owner and the city electrical department, the project team planned and executed their relocation, one by one, without losing power to the building for more than a few moments. 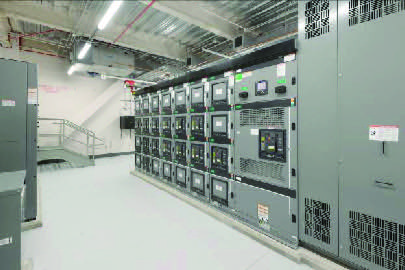 Egan said the operation was started by relocating one of the redundant transformers to a temporary concrete pad constructed within the adjacent parking deck. Egan coordinated with the city and Winston-Salem based Salem Electric to simultaneously construct one temporary connection between the grid and the relocated transformer, and another that tied the existing distribution panel back to the same.

“Once all systems were in place, we conducted a planned shutdown and transfer that required de-energizing an existing transformer, then reenergizing the temporary transformer that fed the panel,” Egan said. The team prepared, took their places, and waited for the exact, predetermined moment. Working in perfect unison at the word “go,” they performed this critical high voltage switchover in less than 90 seconds.

According to Egan, the process was repeated three more times, until all the transformers were successfully relocated and without incident. Each power transfer lasted only 60 to 90 seconds, after which the old de-energized connections were demolished.

Salem Electric project manager Terry Crawford said this was one of the most challenging projects he has ever worked on. “Every one of the seventy-two shutdowns were equally risky,” he said. “Everyone took responsibility,” Crawford noted. “We held mock shutdowns with everybody in place when we killed the breakers, and always had a backup plan if the system failed.”

Greensboro based AC Corporation worked extensively with the project team to replace the aging chillers and cooling towers without compromising the hospital’s environmental systems.

The mechanical contractor used a staggered startup schedule that had the chillers go online every two weeks. By phasing the installation of system components, the project team was able to test and verify the mechanical equipment at acceptable levels within the hospital. The schedule took into account local weather forecasts to minimize demands on the system during the transfer.

Rentenbach’s MEP planner Sandy Burcham devised a method to keep the hospital supplied with chilled water for air conditioning during the critical renovation that also resulted in cost savings to the hospital. While preliminary plans had called for a complete tear out and relocation of the old chillers (save for one smaller unit) and temporary chillers to handle the chilled water shortfall, Burcham proposed an innovative interim piping solution that allowed one of the existing 1,900-ton chillers to be left in place and operating during construction, thus reducing labor and temporary chiller costs.

The project team also determined that supply and return lines for the originally proposed temporary chiller be constructed as a contingency plan, should the old unit fail. This proved to be an intelligent decision, as the old chiller did eventually break down during the project and the team was able to easily transition to a temporary unit. His strategy of maximizing the chiller’s useable life while preparing for its failure ultimately saved the hospital $400,000.

Another significant challenge was the construction of a building addition for the new electrical switchgear equipment. This critical addition served as a new center for regulation, distribution, and switching of power for the hospital. To complicate matters further, the building footprint was nestled between a busy loading dock and the ambulance entrance of the Emergency Department, and another active, city owned power transformer was situated within it. The project team met this challenge by constructing this single building in two halves.

The lack of space for heavy equipment to drive foundation piles and erect structural steel proved to be a major challenge.

The team responded with additional oversight and safety planning to ensure that ongoing deliveries and the emergency department were not disrupted.

“After the first half of the building was finished, we coordinated the installation and startup of new equipment,” said Altman. “This allowed the existing transformer to be removed, thus permitting the completion of the second half of the building,” he added. This plan also proved successful, and was completed without disruption or incident.

One of the project requirements was that the hospital would remain fully operational during construction. The entire project schedule and phasing was developed to minimize impact to ongoing hospital operations, and extra measures were taken to manage traffic during critical deliveries. Senior superintendent Jay Jeffery devised a plan to cordon off a portion of the top level of the adjacent employee parking deck as a material staging area. Rather than offload building materials to a ground level area (which was non-existent at the site) or create traffic congestion and safety hazards by shuttling all materials from an offsite location, cranes simply off-loaded delivery truck loads to the top of the parking deck. From there, materials could be staged and “picked” by the crane as needed, in close proximity to the work without compromising safety or schedule.

The schedule was challenged by some unforeseeable delays in the permitting process, forcing a start date that was two months beyond the original intended date. In light of this difficulty, many of those involved, including the hospital representatives themselves, did not believe the project could be finished in the time allotted.

However, the benefit of a comprehensive preconstruction plan, a thorough schedule, and an experienced team helped overcome potential delays. Thanks to the experience of the Rentenbach team, the original completion date was not only held, but the project actually finished one day early. “And we came in under budget,” said Altman.

The High Point Regional infrastructure project was one in which several things could have gone wrong. However, thanks to a well thought out master plan, excellent teamwork, applied expertise, and a common sense of commitment, everything went right. The hospital itself, once operating under the ominous threat of a major system failure in its electrical and environmental systems, now stands out as exemplary among medical centers for its energy preparedness and system redundancy.

Typically, hospitals maintain power generation capacity for critical systems only, leaving some HVAC, lighting, and less critical systems off-line during an outage. As of this writing, High Point Regional is now the only hospital in North Carolina to have full, 100 percent emergency generator backup for its entire campus. This means patients will have the full benefit of all the hospital’s systems even in the event of a complete power outage.

According to Burroughs at Dewberry, the emergency power control system at High Point is a “SCADA” system. SCADA is an acronym for Supervisory Control and Data Acquisition. The system provides graphical displays of system status on large screens at several locations in the facility. The system controls generators, emergency power transfer switches, and manages loads on the system. The system can shed less critical loads during a power outage to prevent overloading of the emergency power system.

High Point Regional is to be commended for its foresight and timely response to the risks associated with the hospital’s aging equipment. Rather than wait for a catastrophe to happen, the hospital management took decisive action to maintain High Point Regional’s legacy of excellent care. The project team successfully conducted a full “heart transplant” of the hospital with barely a flicker of the lights. 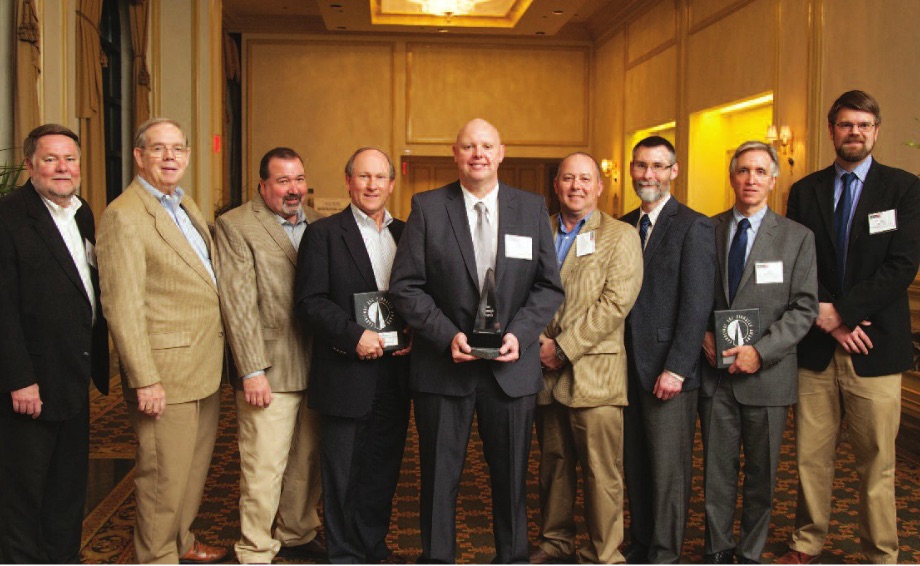