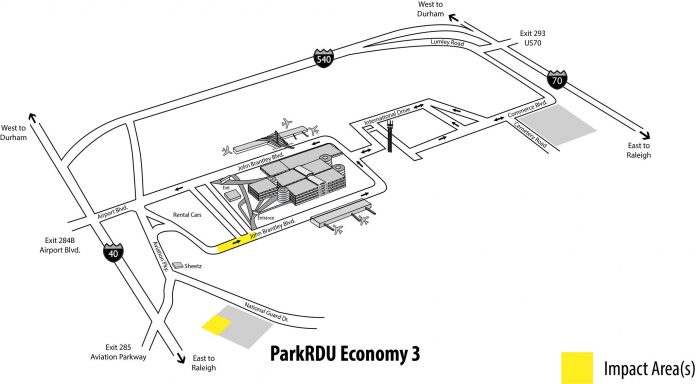 “The airport has $1.2 billion in capital infrastructure it must maintain to keep air traffic flowing and provide travelers a safe, world-class experience,” Raleigh-Durham Airport Authority president and Chief Executive Officer Michael Landguth said in a statement. “We are also initiating projects identified in Vision 2040 to meet the Triangle’s growing aviation demand. With new, expansion and restoration construction projects occurring throughout campus, we encourage travelers to add time to navigate the airport and parking lots prior to their flight departure time.”

Roadway improvements: Repaving of RDU’s main roadway, John Brantley Boulevard, will resume in mid-April, resulting in some lane closures and detours. Beginning April 20 and occurring through the fall, changes to traditional and electronic directional signage on airport roadways will also take place, improving travelers’ ease of navigation around campus.

Runway preservation: RDU will commence rehabilitation of its primary runway, 5L-23R, beginning April 1. Airport contractors will begin work to preserve the runway, which is reaching the end of its useful life. The rehabilitation process requires the runway to close 18 hours each day for replacement of large slabs of deteriorating concrete. The 18-hour timeline is scheduled to primarily take place overnight to avoid flight schedule disruptions. Runway preservation will occur in three-month sprints, pausing in June and resuming in September.

The runway project has an estimated $15 million construction cost, an airport spokesperson said.

“We look forward to extending the useful life of our current 5L-23R runway, but we must continue to look toward its eventual replacement,” Landguth said. “Runway preservation alone is unsustainable long-term and cannot support long-haul flights to new international destinations. It is critical that we gain community, state and federal support for runway funding today.”

$144 million permit issued as Amazon distribution center in Charlotte is...