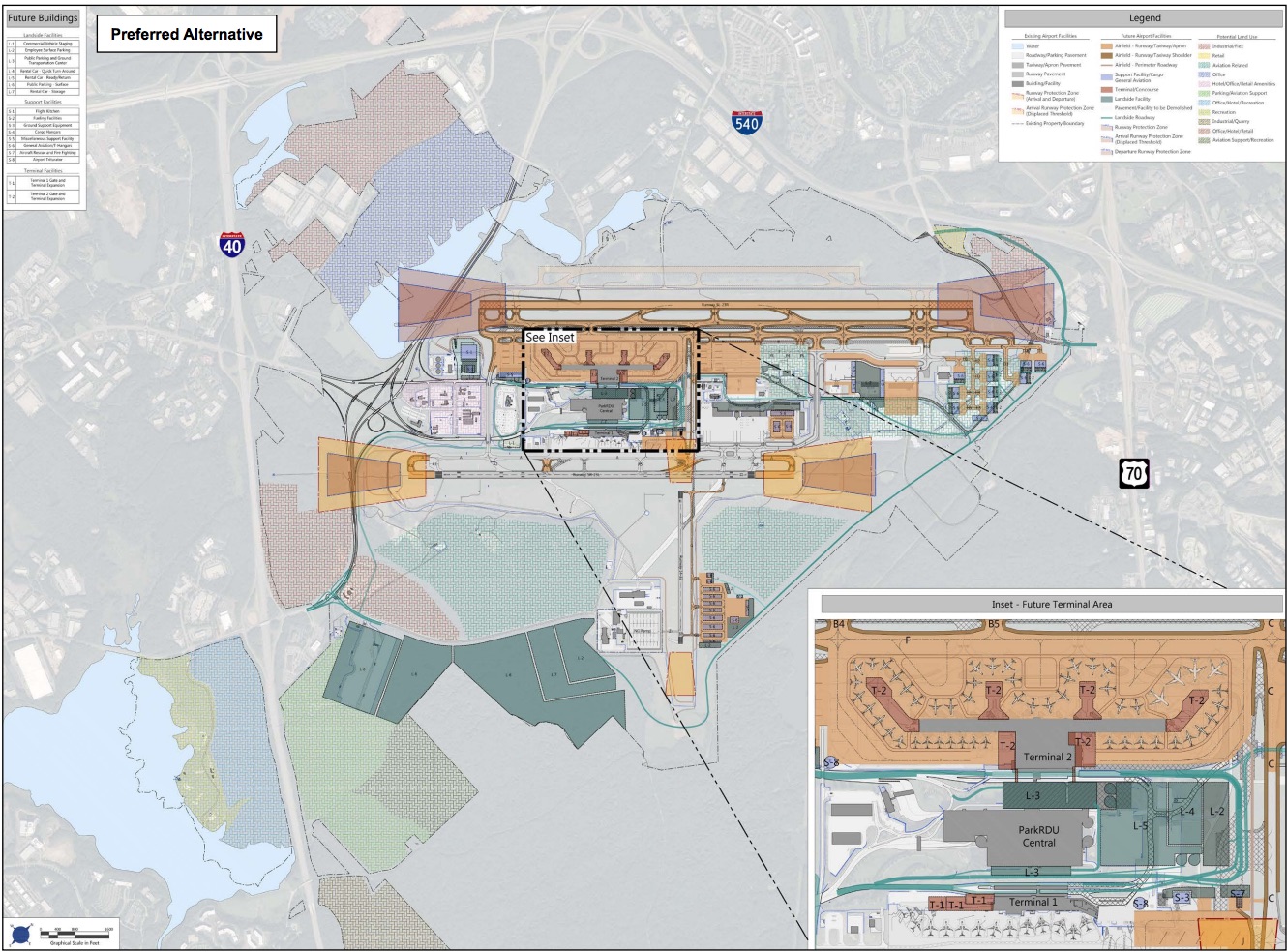 The Raleigh-Durham Airport Authority (RDU) board has unanimously approved its “Vision 2040”, clearing the way to complete a comprehensive master plan that will guide the growth and development for the next quarter century.

“Vision 2040 is an ambitious plan that ensures that RDU will continue to meet the aviation needs of our growing and thriving region,” RDU president and CEO Michael Landguth said in a statement after the Oct. 20 board meeting. “It is a flexible plan that will allow RDU to fly to destinations around the globe and build upon our world-class aviation infrastructure, connecting you to the people and places that matter most.”

The RDU statement said Vision 2040 focuses on four main areas: airfield, terminals, ground transportation and general aviation. Projects within the plan will be built incrementally over the next 25 years, as need and demand warrant.

Airfield: Build a replacement Runway 5L-23R (10,000 ft.) 500 ft. west of its current location. The current runway is nearing the end of its useful life and will become a taxiway upon the opening of the new runway. By moving the runway west, the Airport Authority can continue to use the existing runway while the new one is constructed and the location of the new runway will allow westward expansion of Terminal 2. The new runway can also be extended in the future if needed to accommodate additional future international air service.

Terminals: Based on demand, up to 23 new terminal gates may be needed by the year 2040. Of these, 19 would be built at Terminal 2 via westward concourse extensions over time as demand warrants. Ticketing, bag claim, security checkpoint and federal inspection facilities would also be expanded. Terminal 1 would receive a modest southward expansion with four additional gates.

General Aviation: As demand warrants and private investment funds are available, the Airport Authority will provide space for general aviation facilities and infrastructure growth. A new corporate aviation campus will be located near Lumley Road on the airport’s north end and a campus for smaller general aviation aircraft campus is planned adjacent to Runway 14-32.

Watch a video illustrating the Vision 2040 Master Plan at https://vision2040.rdu.com/plan. On that page, you can also link to detailed maps showing the preferred alternative.

The RDU board action followed nearly 18 months of study, community involvement and planning. More than 1,000 public comments were received during the master planning process during 9 public workshops, via social media and through a comments section on the master planning website.

Now that the board has approved the Vision 2040 Master Plan, the Airport’s consultant, Ricondo & Associates will move forward with financial and implementation analyses, and develop an Airport Layout Plan that will be submitted for approval by the Federal Aviation Administration. The results of those studies will be presented at an upcoming public workshop.