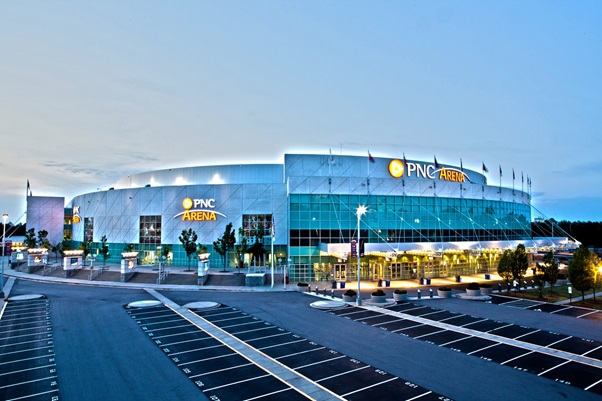 At a recent meeting, the Centennial Authority was informed by architects that the proposed renovation of PNC Arena in Raleigh could cost $200 million, reports The Charlotte Observer.

At the meeting, Ratio Architects of Indianapolis provided the “new vision” of the arena. The discussion included proposals for a rooftop bar and restaurant on the south end facing Carter-Finley Stadium, the possibility of removing stairwells or suites for more “income-producing spaces” and removing some aisles on the lower level to add more seats, according to the Observer.

The projected construction cost from the Ratio and HOK architects was an estimated $167.4 million to $201.8 million, with additional costs for planning and fixtures.

The Centennial Authority owns and oversees operations of the PNC Arena.

In order to strengthen the facility’s position in the large-venue entertainment and event market, in 2014, the arena’s governing board commissioned RATIO and 360 Architecture to carry out a visioning study and master planning process.

The implementation-focused master plan addresses renovations and additions desirable for the arena’s continued competitiveness and relevance for the next 15 to 20 years. The upgrades will focus on improving the fan experience, enhancing hospitality opportunities, increasing support infrastructure, and efficiently expanding administration functions.

If approved, the arena construction would begin in 2020.