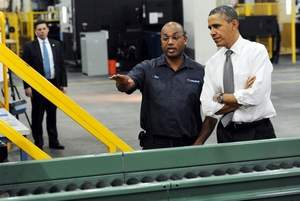 President Barack Obama on Wednesday touted the partnership between auto-parts maker Linamar Corp. and Asheville-Buncombe Technical Community College in making the case that government should do more to train workers for the jobs of the future.

The community college worked with the company to teach students the skills they needed to get jobs at the plant, which makes engine blocks and other parts for heavy equipment reported the Asheville Citizens-Times.  The president called the partnership “smart.”

“It’s good for Linamar, because they’re getting workers who they know can do the job,” he told a crowd of workers and their friends and family at the plant. “It’s good for the folks who are going to the community college, because they know if they work hard and they do well in the class, there’s a job waiting for them.”   The Canadian company opened in a former Volvo plant in 2011. It employs 160 people and plans to hire 600 by 2020.

Obama landed at Asheville Regional Airport about 11:15 a.m. Wednesday. He walked down the steps of Air Force One and directly into an armored Cadillac limousine. The president toured part of the production line inside the plant with factory workers before addressing a crowd gathered on the factory floor.

Valley Springs Middle School Vice President Audrey Chor, Roberson High School student body President Lydia McKeithan and senior class President Jaylyn Miller were invited to the Linamar event, where they got to shake the president’s hand and chat with him briefly in the crowd.

“It was a little nerve-racking, having the Secret Service behind us yelling, ‘Take your hands out of your pockets, show your hands,’” Miller said. “But that was pretty awesome, to shake his hand and talk to him. It was kind of amazing.”   McKeithan and Miller both said they hoped to hear the president address raising the minimum wage and creating more jobs, and were pleased with his plan to bring more career opportunities to the mountains.

Mark Treffinger, Linamar’s general manager, talked to the president about the plant’s workforce and A-B Tech’s role in training its workers.  Read More.