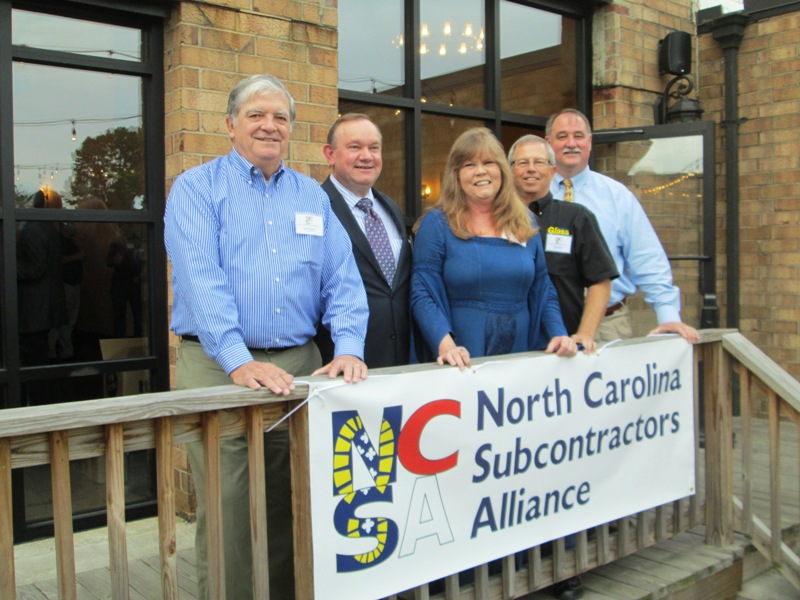 Through its new iteration and mandate, the North Carolina Subcontractors Alliance (NCSA) is working to bring members back into the fold, setting new programs and goals and representing the subcontractor industry in a way it was unable to before.

On June 25 the Charlotte Chapter voted to disassociate from the ASAC as well as from the ASA. NCSA president Duff Regan, says the move resulted from years of declining membership, industry changes and the sense subcontractors in the region were not getting the support they needed.

Director Edward McNaughton says the Charlotte chapter had been independent from the beginning so stood in a unique position as a separate identity with an association with the national organization. “Politics and economics are local and it was hard for ASAC to adjust,” he said. “The people there are doing a great job and I have great respect for the organization but it just wasn’t meeting the needs of our members.”

“We came up with four areas we felt we needed additional support and, after months of contemplation, put it to a vote and the members voted overwhelmingly to disassociate,” says Regan

These areas were: Advocacy and a voice at the Raleigh legislature; education, focusing not just on technical aspects but on the business side of the industry; increased opportunities for networking; and financial control over how and where member dues were spent.

Vice president Chris Paone says the new perspective of the revitalized organization will allow energies to be focused closer to home.  Members will have a greater ability to keep up with industry changes, the NCSA will support them in the “business of doing business,” and will use new technologies to enhance networking opportunities.

“What we cannot do as one, as a group of ones we can do,” Payone said. “Our board is very creative and diverse and, though it won’t happen overnight, given time we have the ability to create a strong, revitalized organization that will have a meaningful impact.”

Membership chair Linda Drummond says part of the decline in membership can be blamed on the recession. The rest though is due to younger people taking over the decision-making processes and not being happy with the same old things, with higher dues and nothing coming back to the region, and offerings that were the same as they had been since the beginning.

Regan says membership had dropped from 80 in 2004 to about 15.  Already, membership has doubled in the four months the newly named association has been in existence.

“We’re holding ‘Lunch and Learns’ to find out what specific general contractors want and need,” he said. “This year we’ll focus on increasing our numbers and implementing some of these new programs but the main focus for program implementation will take place next year.”

She says one of the new and unique offerings will be a GC Council whose roundtable discussions will focus on what general contractors look for in subtrades and what can be done to become a more attractive offering. “This is not typical networking,” Drummond said. “It is relationships building, problem solving and information sharing at all levels. We’ll also look at how to better communicate to help the industry as a whole.”

Other networking events, such as the recent Subtoberfest, offered subcontractors a chance to engage with like-minded businesses and prominent general contractors at the historic Olde Mecklenburg Brewery. In November a joint dinner meeting at the CarolinasAviationMuseum co-sponsored by NAWIC (National Organization of Women in Construction) will feature NC Labor Commissioner Cherie Berry.

McNaughton says an effort will also be made to connect with like-minded associations. “Many of our members belong to another construction trade association which gives them two votes and double their voice. Where there is synergy between the two there is the potential for a greater impact.”