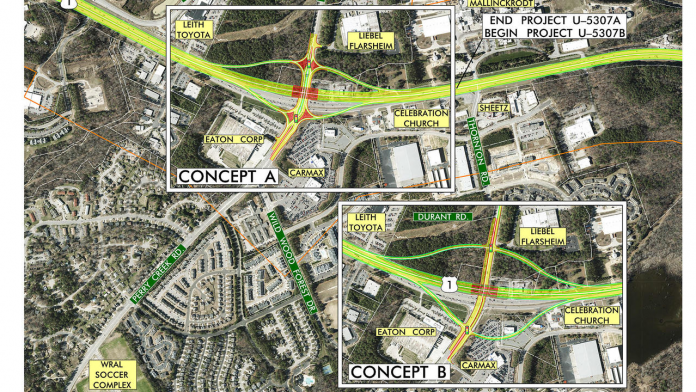 The N.C. Department of Transportation (NCDOT) plans to turn Capital Boulevard into a freeway from Interstate 540 in Raleigh north through Wake Forest, according to plans presented at public meetings.

NCDOT says the $465 million freeway project would be six lanes wide, with 12-foot shoulders and a concrete median, the News & Observer reports.

Planning for the freeway began in 2006, with a U.S. 1 Corridor Study completed by NCDOT, local governments and transit agencies and the Capital Area Metropolitan Planning Organization. NCDOT hopes to refine its plans by next summer and award a contract for final design and construction, which would begin in the spring of 2021.

“This is a much needed and timely project,” Theodore F. Mayer wrote on NCDOT’s website.

Wake Forest planning director Chip Russell told the News & Observer that NCDOT and the local governments in Raleigh and Wake Forest will come up with new access roads to homes and businesses cut off by the freeway, but those don’t appear on the state’s plans now.

“The challenge is going to be working that service road concept to get everybody tied back in to where the interchanges are going to be,” Russell was quoted as saying. “Unfortunately we don’t have that component ready yet.”

The Wake Forest Crossing shopping center will lose its driveways and become accessible only via Stadium Drive, which will no longer connect with Capital Boulevard.

Russell said there’s a possibility of an exit from the northbound lanes of the freeway into the shopping center, but not a full interchange. Construction on this northern-most leg of the freeway, from N.C. 98 to near the Franklin County line, would come later than the rest, starting in 2024, he was quoted as saying.