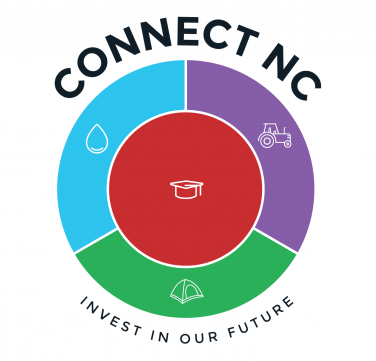 Voters across North Carolina on March 15, in a two-thirds vote, have approved borrowing $2 billion for infrastructure projects, mostly involving new buildings, repairs and renovations at the UNC system and community college campuses,  The remaining one-third of the bonds will be used for local government water and sewer projects, construction money for parks, the National Guard and the Department of Agriculture.

“The bond approval follows hard work by Carolinas AGC (CAGC), led by CAGC’s Betsy Bailey and CAGC Board of Directors member Scott Cutler of Clancy & Theys, in helping in a wide-ranging campaign with business and community leaders to educate voters on the importance of the bond passage through a successful media campaign,” CAGC said in an announcement. “Passage of the bond issue also is the result of strong leadership from N.C. Rep. Dean Arp, R-Union, Gov. Pat McCrory, the NC General Assembly, the UNC system and community colleges, and the State Innovation Committee led by architect Paul Boney of LS3P.”

“The $2 billion bond approval comes on the heels of CAGC’s efforts last year, led by Berry Jenkins of CAGC, to secure $1.2 billion in new transportation funding in North Carolina. CAGC’s Leslie Hope continues to push for approval of transportation funding in South Carolina at a time when a Senate-approved roads bill directs $400 million in recurring revenue from the state’s General Fund to the Highway Fund. On the federal level, AGC of America and ARTBA, helped lead recent efforts on the five-year, $305 billion highway bill approved by Congress.”

“Voters across North Carolina spoke loudly and clearly on March 15 in overwhelmingly approving the $2 billion in bonds, showing they understand how important infrastructure funding is to moving our fast-growing state forward,” said CAGC president and CEO Dave Simpson. “Much credit is due to the vision of the NC General Assembly and Gov. Pat McCrory and the tireless work of the Connect NC bond supporters in a short time frame before the early primary this year.”

“(This is) great news for the construction industry and for our state. Thank you Governor McCrory, Representative Dean Arp and many others for their tremendous efforts,” Bailey said in a statement.

McCrory asked for a bigger bond package to include road projects, but legislators disagreed, choosing to pay for roads through transportation funds. McCrory on Tuesday night praised the approval of the bonds package. “North Carolina has sent a message to the nation that people can come together and work to pass a bond package that will benefit future generations,” he said in a news release.

The bond passage marks the first N.C. statewide bond since 2000, when nearly three-quarters of voters approved $3.1 billion in construction spending for the UNC system ($2.5 billion) and the community colleges ($600 million).

The Connect NC coalition worked to raise $2 million for a campaign to pass the referendum. CAGC’s efforts led in pledges of more than $200,000. McCrory and the state’s higher education leaders pushed hard in recent weeks for bond passage, crossing the state making public appearances, underscoring the condition of outdated buildings and a statewide population that had grown by two million since the 2000 referendum. Supporters also highlighted the regional improvements to water and sewer systems and state parks. Referendum signs touted images of wild animals – tapping into public support for the North Carolina Zoo, which would receive $25 million.

The higher education portion of Connect NC – $1 billion for the UNC campuses and $350 million for community colleges – focuses on buildings for science, technology, math and engineering, along with facilities to train nurses and other health-care professionals.

“NC lawmakers are to be commended for their support and passage of the bond referendum – in and out of the Legislature,” the CAGC article observed. “For example, N.C. Senate leader Tom Apodaca, R-Hendersonville, in an article this month in the Asheville Citizens-Times commended the long-term return on the $2 billion investment in a guest column last week.”