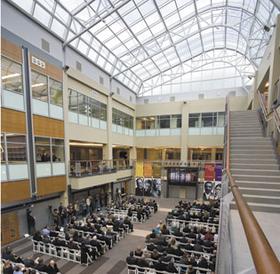 A legislative effort to slash the state’s energy-efficiency requirements for new buildings gained crucial support in the NC Senate Commerce Committee on June 18.  The News & Observer reports the committee approved a bill that would roll back energy-efficiency requirements of new office buildings and commercial facilities by an estimated 30 percent. The bill, which is designed to help the construction industry, has divided contractors and builders as it would reduce the market for high-efficiency materials and services that benefit from current standards.

Supporters said easing up on efficiency mandates will energize the economy by lowering construction costs and spurring commercial development. They said free markets are the best guide for determining a society’s energy-efficiency needs. Critics countered that relaxing efficiency standards would make North Carolina a laggard in the Southeast when it comes to building codes. They contended that less wasteful buildings would reduce overall energy demand and lower energy costs over time.

“I’m concerned about moving backwards in energy efficiency,” said Democratic Sen. Josh Stein of Wake County. “Energy efficiency is one of the cheapest ways to generate electricity because that’s power plants you don’t have to build.”  The bill previously passed the House and is next headed for the full Senate.

“Anything that can minimize the upfront costs will prevent buildings from not being built,” said Dave Simpson of the Carolinas AGC, a trade group for associated general contractors. Simpson, the group’s government relations and building director, said the state’s insulation standards force builders to use sturdier beams for support, raising lumber costs by 33 percent. He said that high-performance windows and heat pumps also drive up overall building costs.

“There is such a thing as a tipping point where it doesn’t make good business sense to build a new building,” said Simpson, who noted that his organization’s membership is divided on the issue of efficiency standards.

The legislation, which would repeal the state’s 2012 building energy code, applies to new commercial construction only, and would revert to the state’s 2009 code. However, homebuilders would be unaffected and would continue to operate under the 2012 code.  The bill would lower commercial efficiency standards across the board for insulation, ducts, equipment, windows and lighting.

Commercial builders would not be prohibited from meeting or exceeding minimum efficiency standards, but they would not be obligated to do so.

The N.C. Building Code Council, whose members are appointed by the governor, periodically adopts safety and other codes. House Bill 201 would take the unusual step of overriding the independent council’s most recent overhaul of state building codes.

The council approved the changes in 2010 to go into effect in 2012. At the time, the council voted down a proposal that would have delayed the adoption of the commercial building code changes until 2014.

The legislature’s move to repeal the 2012 building energy standards is controversial among contractors and related industries who have benefited from stricter energy efficiency standards. Skanska, a global construction company, spoke out against the bill.  “That code drives innovation in the industry,” said Will Senner, a Skanska engineer. “It creates jobs from day one.”

According to a legislative staff analysis, the stricter standards would save an extra $67 million in energy expenses in the first year of operating offices and commercial buildings, and $2 billion over 30 years. But they would add $900 million to construction costs.

Republican Rep. John Torbett of Gaston County, the bill’s primary sponsor, told Senators that his effort would go down easier if it wasn’t characterized as a repeal of efficiency standards. “If it makes you feel a little better, don’t think of the word ‘repeal,’ ”Torbett said. “Just think of the word ‘readopt’ the code from 2009.”  Read More.