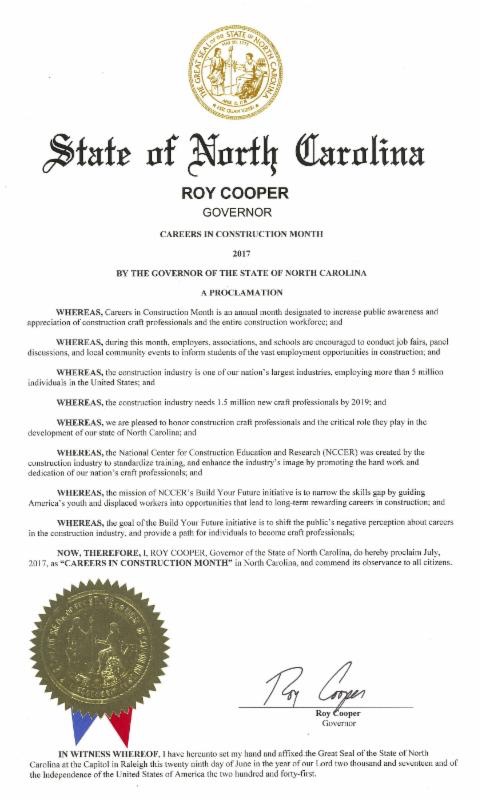 The Associated Builders and Contractors (ABC) of the Carolinas has released a proclamation signed by Gov. Roy Cooper designating July 2017 as “Careers in Construction” month.

“We strongly support the initiative to narrow the skills gap by placing America’s youth and displaced workers into opportunities that lead to long-term and rewarding careers in construction,” said Chris Bullard, ABC’s director of government affairs.

Construction is one of the nation’s largest industries, employing well over five million people. Unfortunately- one of the biggest issues the industry is faced with today, is the alarming shortage of skilled labor available to fill most of these jobs. It’s estimated that the United States will need to hire roughly 1.5 million craft professionals by the end of 2019.

“Shifting the public’s negative perception about careers in construction is vital to the success of our industry,” Bullard said in a statement. “ABC of the Carolinas apprenticeship and training programs provide a unique opportunity for individuals to grow as a leader and as a craft professional.

“We look forward to working with the Governor, his administration, and other agency officials to better support our state’s workforce development and training needs, the ABC Carolinas statement said.