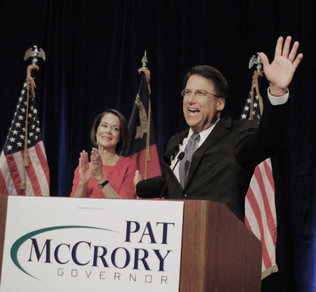 North Carolina voters elected, for the first time since the 1800s, Republicans to take control of state government—an action that bodes well for the state’s construction industry.

Republican Pat McCrory, a staunch supporter of infrastructure funding and business, breezed to victory for governor. McCrory, while on the campaign trail, repeated construction-friendly themes of growing jobs, spending more money on infrastructure, cutting government red tape, continuing regulatory reform, modernizing the tax structure, and bolstering vocational education. McCrory, who developed an outstanding infrastructure growth program for Charlotte during his tenure as mayor (including a new runway at Charlotte Douglas International Airport), could prod the GOP-led legislature on infrastructure fronts.

“We will provide your people jobs and put them back to work,” McCrory told Carolinas Associated General Contractors lobbyists Berry Jenkins and Dave Simpson at a McCrory fundraiser in Raleigh.

The Associated Builders and Contractors of the Carolinas endorsed McCrory’s candidacy during this summer’s ABC Carolinas Construction Conference in Wilmington. “The election of Pat McCrory as Governor was a top priority for the commercial and industrial construction industry and the thousands of Tar Heels it employs,” said Doug Carlson, ABC President and CEO. “He has articulated a clear, concise business plan to reduce taxes and cut regulations that hinder job creation and supporting the free-market, merit shop philosophy.”