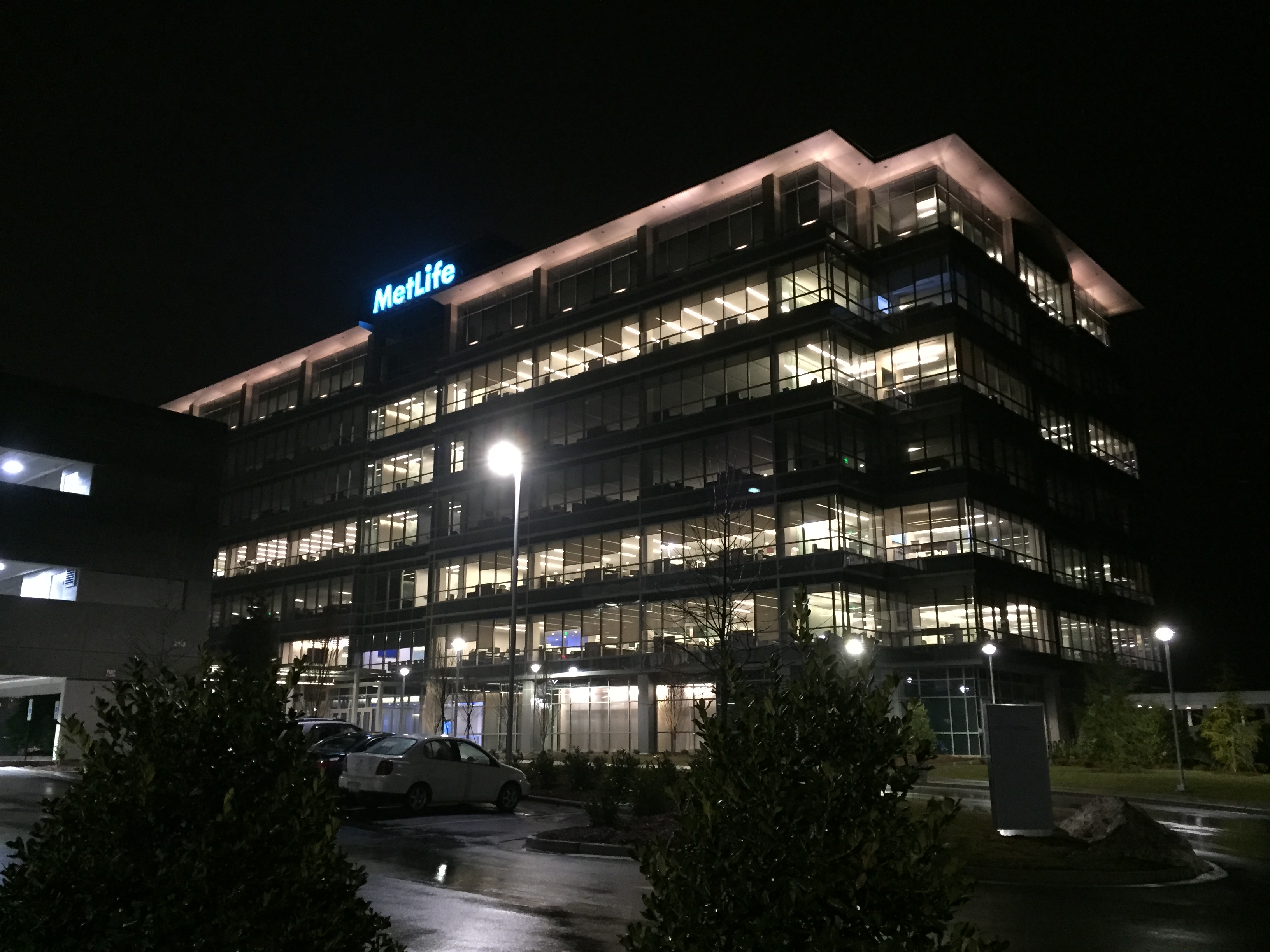 The project’s overall success depended largely on the collaborative relationships between MetLife and Highwoods and their design and construction teams.

In early 2012, New York-based MetLife began a national site selection process to build a stand-alone Global Technology and Operations (GTO) campus that would provide a more collaborative work environment for its employees.  The new GTO campus would be home base for over 1,000 highly-skilled IT employees.

In addition to recruiting and hiring a high caliber labor force, MetLife needed to maintain confidentiality during the site selection process.  The company engaged Cushman & Wakefield/Thalhimer as its real estate advisor.  To assist with the site selection decision and also with economic incentive negotiations, MetLife engaged KLG advisors as its location consultant.

In 2013, MetLife announced it had selected Cary as the new location for the GTO group campus. The decision to locate in North Carolina was influenced by an economic incentive package that could be worth up to roughly $100 million subject to the combined job creation milestone between the GTO campus in Cary and the new MetLife U.S. Retail hub in Charlotte.  NC Governor Pat McCrory announced in March 2013 that MetLife intended to create over 2,600 jobs in North Carolina by the end of 2015, the largest jobs announcement in recent state history.

Fortunately for MetLife, Raleigh-based Highwoods Properties, Inc. had been holding 40 acres of prime lakefront property in the Triangle area for a significant project.  It turned out to be a good fit for the MetLife build-to-suit project.  MetLife entered into a pre-lease with Highwoods to construct the two seven-story buildings at Weston Lakefront. Subsequently, teaming with Birmingham-based general contractor Brasfield & Gorrie, Highwoods was able to deliver the  two highly-amenitized office buildings on time and under budget.

This was a huge win for all parties, particularly for the state of North Carolina. Recently, at the grand opening of its Cary campus on June 22, MetLife CEO Steven A. Kandarian announced that the company had met its goals of creating over 2,600 jobs and investing $125.5 million in North Carolina six months ahead of schedule.

Pamela Abalu, MetLife’s head of global design and construction, said the company’s vision for the GTO hub, was “to create a timeless, adaptable, sustainable and beautiful workplace.”

She noted “the technology and space are aligned to support variations in work styles to help maximize employee potential, and support work in a variety of environments. The whole building is a workplace.”

“We created an environment where people can work from any location on the campus,” Abalu added. Rather than providing single-assigned desks, the GTO hub has wireless capabilities throughout the campus allowing employees to work both inside and outside in a highly open, collaborative manner.

Amenities include abstract murals of Peanuts characters throughout the workplace. The Peanuts characters appear as bronze statues on the lawn and amphitheater, as art in lounge spaces, as cartoon strips lining the walls above copiers, and as signage on restroom doors. In addition, all employee work surfaces lift to suit each occupant’s preference, providing enhanced flexibility for workspace comfort in this social, interactive environment.

Two of the most prominent design features of this project include sustainable elements. Thirty-three percent of the interior walls in both buildings are glass. The enhanced daylighting throughout the buildings enriches the collaborative work environment that includes 2,106 open office seats, 161 closed offices, 190 conference rooms, 3 telepresence rooms, a 550-person outdoor amphitheater, a 92-seat tiered auditorium, 8 mothers’ rooms and 4 wellness rooms.

Randy Roberson, vice president, development for Highwoods said “most of our clients prefer LEED certified buildings for the health and wellness of their employees, along with the operating efficiencies of the building systems.”  Roberson and several of Highwoods employees are LEED professionals.

Birmingham-based Brasfield & Gorrie has an extensive portfolio of LEED sustainable buildings. The company was recently named 2015 Contractor of the Year by Associated Builders and Contractors.  The association recognized the contractor “for their commitment to green building, innovation and continually developing industry best practices.”

According to Taylor Willis, Brasfield & Gorrie project manager, the tight schedule for the MetLife campus project was the biggest challenge.

“We received our first set of design development drawings in September and the construction documents in December of 2013. Two weeks later, we were setting steel columns,” he said.

“Fortunately, we had prior relationships with subcontractors we could count on to provide the manpower and expertise we needed to deliver the job on time,” said Willis.

The scheduling for the two buildings had an approximate 60-day overlap. Several subcontractors were able to move from one building to the other without leaving the jobsite, creating time and cost efficiencies.

Derek Gilmore, project manager, for Raleigh-based L.L. Vann Electric, said MetLife was one of those projects that you don’t forget.  “We were one of two electrical companies on site that had to work together to get building power and systems online by the turnover dates,” he said. “The project was successful because Brasfield & Gorrie along with the landlord Highwoods welcomed input from their subcontractors regarding how best to execute the demanding schedule.

“This collaboration helped not only to maintain the aggressive milestone dates but to improve them where possible,” Gilmore observed. “Some general contractors force an unobtainable schedule on the trades, whereas Brasfield & Gorrie welcomed suggestions and input. In my opinion, this is proof that welcoming subcontractor input and schedule buy-in resulted in a quality product that was delivered on time.”

Terry Fisher, vice-president, SteelFab, said the MetLife project was a collaborative effort with clear common goals for all team members.  “Many decisions had to be made on the fly, but the open lines of communication among all the team members made it possible to hurdle the obstacles,” Fisher noted.

“We were fortunate to have been working with such a dedicated, cooperative, and professional design team,” added Fisher.  “Brasfield & Gorrie assembled an A team of subcontractors. As we have found with all successful projects, the key ingredient is leadership.  The steady and clear guidance with a focus on the big picture as well as the small details made the success of this project possible.”

Paul Whit Howard, PE, vice-president of Raleigh-based Newcomb and Company, said “the combined teams of Highwoods and Brasfield & Gorrie were responsive and decisive in all communication.”

“They established a positive overall culture that facilitated teamwork and encouraged shared responsibility.  This produced the team attitude to excel, to proactively solve problems, to produce a quality product and to meet the scheduling demands,”  said Howard.

Brasfield & Gorrie worked diligently with the design team to identify appropriate sustainable materials that could meet the demanding schedule.

“Our goal was to meet and exceed our client’s expectations,” said Willis.

Myers added, “The professionals at MetLife and Highwoods were thorough and professional in every way. Because of the excellent communication between all stakeholders, we were able to overcome scheduling and logistical challenges.”

At the MetLife ribbon-cutting event, North Carolina governor Pat McCrory said, “MetLife has become an anchor in the Triangle’s expanding tech sector and a great example of how corporate partners can positively impact our state’s economic growth.”

“Our hiring has moved faster than we expected because of the rich talent pool and business friendly environment we have found in North Carolina,” said MetLife CEO Kandarian. “We are more convinced than ever that we made the right decision
in choosing Cary and Charlotte as hubs for our global technology and operations organization and U.S. retail business. We look forward to strengthening our ties to these communities and to the state as a whole in the years to come.”