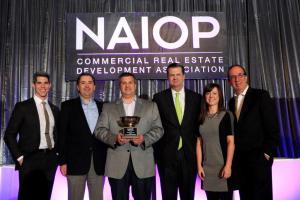 The Research Triangle chapter was awarded small chapter of the year for outstanding work, participation, and achievement, bringing a trophy back to Raleigh, NC.

The Chapter Merit Awards are a traditional highlight of NAIOP‘s annual Chapter Leadership and Legislative Retreat which brings together more than 300 chapter leaders and executives representing 52 chapters throughout the United States and Canada.

“NAIOP has a long tradition of honoring its chapters, and this year‘s event was no exception,” said Thomas J. Bisacquino, NAIOP president and chief executive officer. “Our panel of volunteer judges had a challenging task in choosing the award winners from the many outstanding nominations that were received. On behalf of the association, I congratulate each and every nominee, and offer special recognition to all who were honored during our celebration,” said Bisacquino.

“On behalf of the association, I’d like to extend my congratulations to NAIOP Research Triangle Chapter for winning small chapter of the year.”