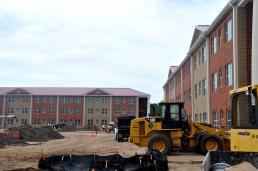 “The days of large military construction projects are gone,” said retired Col. Greg Bean, director of public works at Fort Bragg and one of the panelists. “So our philosophy is to maintain what we’ve got.”

Col. Steven Baker, commander of the U.S. Army Corps of Engineers Wilmington District, said his agency has 34 military projects under construction this year worth $372 million. Many of them are focused on U.S. Army Special Operations Command based at Fort Bragg.

Some of the energy projects include a Building Operation Command Center that monitors building efficiency on post and the retrofit of dams along Little River to incorporate hydroelectricity turbines. More than 300 buildings are going through retro-commissioning, which is supposed to save Fort Bragg 25 percent of energy costs for barracks and 65 percent for administrative space, Blue said.

Before lunch, U.S. Sen. Richard Burr, who co-hosted the conference, brought up the fears of sequestration, or automatic federal budget cuts, to the audience.  If the cuts happen, it will be destructive to the federal marketplace, he warned.

“We’ve got to challenge private business to work with us in a different way,” Burr said. “We will weather the storm, and we will grow while others seem to be bogged down.”

Other constraints to the federal market that were discussed include unrest in the Middle East, the Afghanistan drawdown in 2014 and the Army reduction of 80,000 soldiers, according to the U.S. Army Corps of Engineers.

Among the crowd was Ladson Brearley, vice president of federal programs for AECOM, a technical and management support services company based in Charlotte. His company helped build the LEED Platinum community emergency services center in the Linden Oaks military housing community in Harnett County.  He said his company hopes to expand its presence in military projects.  “If there’s anything coming out of Fort Bragg, we’re hoping to eye that and pursue it,” Brearley said.

It was Sandra McGough’s second year at the FEDCON Summit. She stood next to her exhibit for Jacobi Hardware, based in Wilmington. When Jacobi could not find a lot of opportunities in the commercial sector, the company began to go after defense work.  Read More.