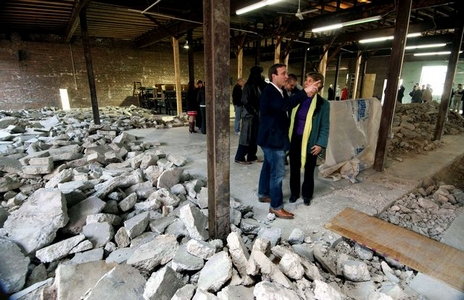 In place since 1998, the state preservation tax credits are scheduled to sunset out of existence effective Jan. 1, 2015, thanks to recent tax reform measures in the General Assembly.  According to the Salisbury Post,  developers, preservation groups and downtown supporters say the economic and quality-of-life effects could be devastating, especially to historic-minded cities such as Salisbury.

“It’s a crime,” says Bill Greene, whose Literary Bookpost restoration on South Main Street took advantage of preservation tax credits and represented a $318,000 investment.  “It’s been such a critical part of downtown renovations around the state. … I don’t know what they’re thinking.”

The numbers are hard to dispute. In April, Ramona Bartos, deputy state historic preservation officer, compiled a report from various sources on the economic impact of the preservation incentives.  The executive summary of that report made these observations:

• According to the N.C. Department of Commerce, the state tax credits support an average of $124.5 million in state gross domestic product and the creation of approximately 2,190 jobs a year.

• Those same credits represent a loss to the state’s general fund of $14.2 million annually.

• North Carolina is among 29 states (of 41 which have an income tax) that offer a “piggyback” state preservation tax credit on top of the federal tax credit.

The numbers are impressive in Rowan County, too. Since 1998, the state’s preservation incentive program has been used on at least 48 Rowan projects representing a total investment of almost $21 million. Since federal preservation tax credits became available in January 1976, Rowan County saw 71 income-producing properties and 42 non-income producing homes take advantage of the federal and/or state credits through 2012.

Those Rowan County projects alone, most of which have been in Salisbury, represent more than $30 million in investment.  Rowan County ranks 10th in the state in terms of investment connected to the tax credits — and 5th in the number of income-producing projects. “Personally, I know what incredible results we have because of them,” N.C. Department of Cultural Resources Secretary Susan Kluttz says.

Kluttz is a former mayor of Salisbury who says she saw the role state preservation tax credits played in swaying developers to take on downtown development projects when the numbers didn’t work otherwise.

She and her husband, Bill, also were partners in the Kluttz Drugstore building on the Square with another former mayor, Margaret Kluttz, and her husband George. For that restoration project in the 1980s, the couples took advantage of federal preservation tax incentives — the only ones available at the time.  “I’ve always been an advocate for these tax credits,” Kluttz says, adding she will be making her department’s case for the incentive program with Gov. Pat McCrory, himself a former mayor.

Steve Fisher, president of F&M Bank, says the preservation credits “are an unbelievable tool for developing downtowns like Salisbury.” In 2004 and 2005, F&M invested more than $7.6 million in renovating downtown buildings and made a $15 million investment overall in creating a new “East Square” for Salisbury off North Main, Liberty and Lee streets.

Fisher says it wouldn’t have been possible to do everything without those tax credits having been in place. The savings were used to broaden the scope of the redevelopment, adding amenities such as Easy Street and the Trolley Barn, not to mention the donation of a restored building to Waterworks. Buildings listed in the National Register of Historic Places or those considered as contributing buildings in a National Register Historic District are eligible for state and federal historic preservation tax credits. Salisbury has 10 National Register-recognized historic districts.

Only the state offers a preservation tax credit of 30 percent for residential or non-income producing structures.  If an owner of a qualifying historic home had $100,000 in rehabilitation expenses, he could claim a state tax credit amount of $30,000. All rehabilitation work must meet the Secretary of the Interior’s Standards for Rehabilitation. There are also guidelines for when and how to claim the tax credits on income tax forms.

Often, those against the incentives say they are carve-outs for a favored few, benefiting one sector of the economy by shifting the burden to another.

The counterpoint to that argument for preservation incentives is that the credits grow the economy and ensure that rehabilitation projects are on level footing with new construction, thus making the tax code more fair.  Without the federal and state credits, the argument continues, almost all real estate development would go toward new construction, leaving downtowns and historic neighborhoods to be ignored.

Legislators could lift the sunset provision in next year’s short session. In their early work on a tax reform package, N.C. Rep. Harry Warren, R-Rowan, says he and Rep. Julia Howard, R-Davie, both saw the value in maintaining the preservation incentive. But he notes that in the end lawmakers decided to let all special credits sunset. “I would be glad to look at the savings that were projected to be realized,” Warren says of considering the historic preservation credits separately.