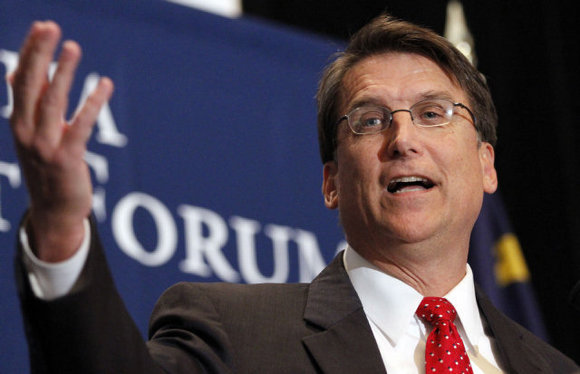 With the campaign behind him, Gov.-elect Pat McCrory gave a somber assessment of the state’s economy and warned that the fix would not make everyone happy, reports the News & Observer.  “We have some problems,” McCrory told business leaders at an economic forum in Durham. “The fact of the matter is our brand of incredible economic prosperity has been diminished a little bit here in North  Carolina. … We have to own up to it.”

McCrory, who takes the oath Saturday, listed a handful of controversial decisions he must confront in his first days – such as implementing the federal health care law, paying for the state’s $2.5 billion unemployment insurance debt and finding a way to revive an economy with the fifth highest unemployment in the nation.

The former Charlotte mayor’s tone sounded similar to the less-than-optimistic economic forecasts for 2013 offered by experts at the conference, which was sponsored by the N.C. Chamber and the N.C. Bankers Association.

John Connaughton, an economist at UNC-Charlotte, said he expects 1.8 percent growth in state gross domestic product in 2013. David Carroll, a senior executive vice president at Wells Fargo in Charlotte, gave a similarly modest number – 1.5 percent. “What we are looking at is a slow start to the year that will tick up by the end of the year,” Connaughton said, expressing more hope about growth in 2014.

Outgoing Commerce Secretary Keith Crisco, who attended the forum, said North Carolinais coming off its best year in terms of job creation since Democratic Gov. Bev Perdue took office. “We’ve got a good momentum going,” he said.  But Connaughton put North   Carolina’s current economy in darker terms, saying the state recovered just 44 percent of the jobs it lost in the recession, which is less than the national average, and fell from 27th to 37th in per capita income in the last dozen years.

McCrory made the state’s economic troubles central to his 2012 campaign, but offered a positive vision with a “Carolina Comeback” slogan. He set a goal to lower the state’s unemployment below South Carolina’s by 2014 – a task economists suggest is overly optimistic.  North Carolina’s rate was 9.1 percent in November compared to 8.3 percent in South Carolina.

Larry Barbour, the president of North State Bank and one of the business leaders in the audience, said he is hopeful about the coming year. And he is encouraged by the new administration, saying McCrory “knows more about business than any governor in a long time.  Read More.