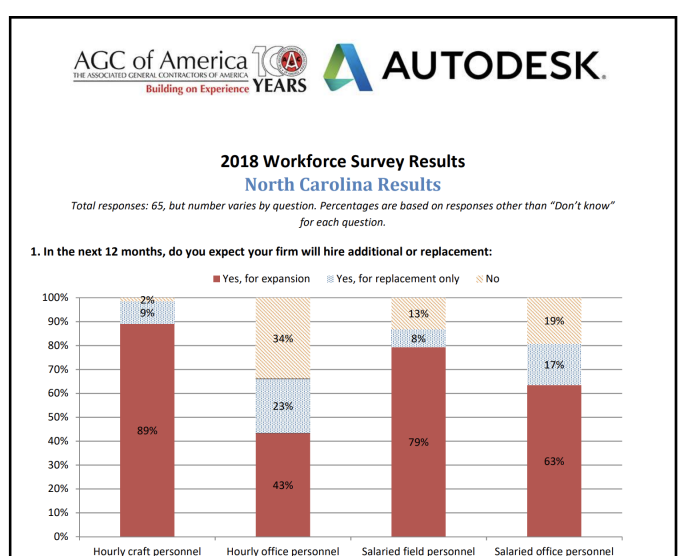 A widespread labor shortage is pushing up construction through most of the country, the Associated General Contractors (AGC) of America) and Autodesk reports in a survey, and the problem is especially acute in North Carolina.

An incredible 98 percent of the state’s contractors said they “are having a hard time in filling some or all positions” for business expansion. And a significant majority (72 percent) are having trouble finding workers for “replacement only”.

Nationally, the survey shows that 80 percent of 2,552 U.S. construction companies indicate they are having difficulty hiring construction workers. This is an increase from 70 percent in 2017.

The labor shortage is especially severe for sheet metal workers, roofers and drywall installers, where 100 percent of the businesses surveyed say they have found it is comparatively difficult to fill workers from last year. The labor shortage is less acute for salaried positions, but 57 percent say they are having trouble finding project managers and superintendents.

On a national level, “What was striking was how universal the difficulty was filling craft positions,” AGC chief economist Ken Simonson told reporters in a conference call. “Now they’re saying no, our bench is empty.”

Simonson said the construction industry is investing in more advertising and workforce training and seeking more government funding as it tries to attract more workers. It is  also pushing for immigration reform that encourages skilled workers to be allowed legally to enter the U.S.

“You can’t just call back someone who was laid off a few years ago,” Simonson said. A challenge is educating prospective workers that construction isn’t a “dirty, dead-end career.”

Some construction workers can earn six figures a year without a college degree, based on federal average wage data.