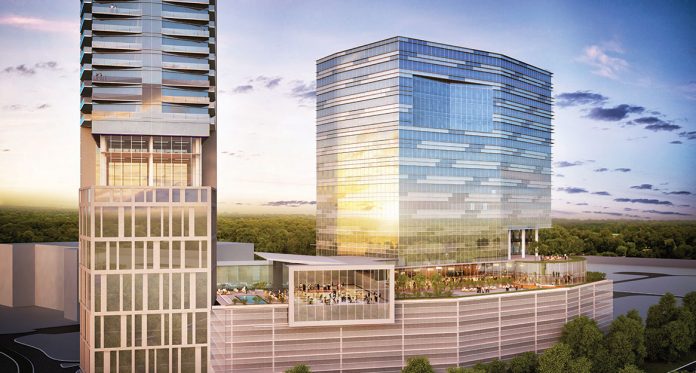 Kane Realty Corp., which developed the thriving North Hills community off of Six Forks Rd., has filed a new application with Raleigh’s planning department to build a 28-story, headquarters-style office tower overlooking Six Forks Rd. and the I-440 Beltline.

The developer has proposed constructing an even more ambitious mixed-use building project of two towers: one 20 stories high and the other at 31 stories high, which is just shy of the tallest tower in downtown Raleigh – the 33-story PNC Plaza, Triangle Business Journal reports.

Meanwhile, developers Todd Saieed and Ven Poole hope to bring a mix of office and residential space between Kane’s new property and the North Raleigh Hilton off of Wake Forest Rd, The News & Observer reported in September.

Last spring, they asked the city to change the development code to allow as many as 20 stories at the site.

Saieed and Poole developed the nearby One Renaissance Centre, a six-story office tower built in 1999.

According to the Kane Realty website the 17-story CAPTRUST Tower will be geared toward residential use with 20 levels of luxury apartments and a 10-story hotel, plus street-level retail.

Construction is also underway for the AC Hotel, the 12-story Allscripts-anchored Midtown Plaza building overlooking the I-440 Beltline, the Park Central apartment and retail complex, and the Cardinal at North Hills continuing care retirement community – all of which are expected to be completed in 2017 or soon thereafter.

The plan to expand North Hills is in line with the city’s vision, said Travis Crane, assistant director of planning and zoning for Raleigh.

Since then, more than half of Raleigh’s new development has gone to the “growth centers,” Crane said.

“We don’t want to continue to sprawl,” he said. “We want to concentrate our growth in these growth centers.”