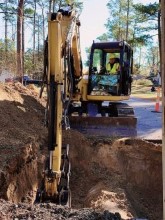 A major Hurricane Florence repair project is about one quarter finished with repairs at 18 of 68 cave-in sites caused by failures to pipes during the storm complete. The project is expected to wrap up by July.

The City of Wilmington incurred millions of dollars worth of damage from the catastrophic Hurricane Florence, which made landfall in the City in September 2018. Since then, the City has been working diligently to repair that damage.

After addressing immediate repairs following the storm, staff worked for several months to identify all the city streets, sidewalks, buildings and drainage infrastructure across the city that need to be repaired.

The city also had to get federal officials to inspect and approve each of the repair sites to make sure the city could receive federal/state reimbursement before the projects could go forward.

Failures to underground drainage pipes during the torrential rains caused cave-ins on city streets. The project started on Shirley Road in December. While there are 68 locations, each one may require more than one point-repair and includes repaving the asphalt. The city has been approved for $2.4 million reimbursement from FEMA.

Repairs to Garden Avenue began the week of Dec. 30. The scope of work on this project involves in-situ rehabilitation of a 54-inch corrugated metal pipe. The work consists of sealing pipe joints and penetrations, pipe back-grouting and probe grouting for soil stabilization using moisture-activated hydrophilic and/or hydrophobic polyurethane resins. It will also include centrifugal spin casting and lining of the storm drain lines and structures and the  removal and replacement of existing storm structures, and certain portions of the 54” pipe.

The $456,962.16 contract is expected to take 90 days. Contractor Applied Polymerics of Mt. Airy NC uses existing manholes to access the pipes, and inject foam-like material that fills the pipes’ cracks from within and then hardens. Garden Avenue will be close to through traffic, but a detour will be open at Cherry Avenue.

A six-month closure of River Road began in September so crews can replace a large drainage culvert beneath River Road. The culvert, located just south of Raleigh Street, was originally damaged in 2017 and failed again during Hurricane Florence. Temporary repairs and paving have allowed the road to remain open in the meantime while planning for this replacement. The Cape Fear Public Utility Authority is contributing $885,000 of the total project cost of $1.37 million because it involves the relocation of a force main sewer line.Trader Construction of New Bern is performing the work.

Because the city has to pay for all of these repairs out-of-pocket with taxpayer dollars, the federal inspections and approval were critical to make sure the city gets reimbursed for as much as possible. So far, the city has spent or appropriated more than $34 million in response to the storm and hopes to get much of that reimbursed. You can also track the projects here.