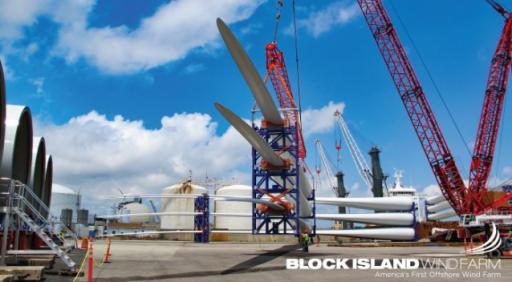 The US Interior Department has announced a proposed lease sale for 122,405 acres offshore North Carolina for commercial wind farm leasing. If successful, the result will be significant construction opportunities in the Outer Banks.

“This is an important and exciting milestone in our ongoing efforts to tap the vast wind energy resources along the Atlantic Coast,” said Interior Department Secretary Sally Jewell. “The proposed lease sale is the result of thoughtful collaboration at all levels to identify areas offshore North Carolina with great wind energy potential, while minimizing conflicts with other important uses. We will continue to work with the North Carolina Renewable Energy Task Force, local communities and key stakeholders as we move forward with harnessing clean energy resources, generating jobs and stimulating local economies.”

The area proposed for leasing is the same as the Kitty Hawk Wind Energy Area (WEA) that BOEM announced on Aug. 11, 2014. This WEA begins about 24 nautical miles from shore and extends about 25.7 nautical miles in a general southeast direction. Its seaward extent ranges from 13.5 nautical miles in the north to .6 of a nautical mile in the south. It contains 21.5 Outer Continental Shelf (OCS) blocks. BOEM has also announced the Wilmington East and Wilmington West WEAs, which, due to their proximity and shared attributes, have been coupled with the planning and leasing process for the South Carolina Call Areas.

The “Proposed Sale Notice (PSN) and Request for Interest (RFI) for Commercial Leasing for Wind Power on the Outer Continental Shelf Offshore North Carolina” has been published in the Federal Register on Aug. 16, and will include a 60-day public comment period ending on Oct. 17.

This document provides detailed information concerning the area available for leasing, the proposed lease provisions and conditions, auction details (including criteria for evaluating competing bids and award procedures) and lease execution. It includes an RFI to assess whether there has been a change in competitive interest in the area since the publication of the North Carolina Call for Information and Nominations in 2012.

“This is a great day for North Carolina and our country as we continue to make progress on diversifying our nation’s energy portfolio,” said BOEM director Abigail Ross Hopper. “With the completion of a successful lease sale, North Carolina will move closer to obtaining substantial contributions to the region’s energy supply from offshore wind. Additionally, such supply will assist local governments in achieving their renewable energy goals.”

In order to participate in the lease sale, potential bidders whom BOEM has determined are qualified to hold an OCS lease for commercial wind offshore North Carolina must submit a response to this notice by the end of the 60-day comment period, affirming their continued interest in the area being offered for leasing.

Companies interested in participating in the lease sale that have not been qualified by BOEM must submit the required qualification materials by the end of the 60-day comment period for this notice. Companies planning to submit a qualification package are strongly encouraged to submit as early as possible during the comment period to ensure adequate time for processing. The PSN provides additional information about qualification requirements.

To be eligible to participate in the lease sale, each company must have been notified by BOEM that it is legally, technically and financially qualified by the time the Final Sale Notice is published.

Comments received electronically or postmarked by Oct. 17 will be made available to the public and considered before the publication of the Final Sale Notice, which will announce the time and date of the lease sale.

The first operational wind farm in U.S. offshore waters may begin generating power off Rhode Island later this year, ushering in a new era in the U.S. for the industry, WRAL TechWire reports.

Developers, federal regulators and industry experts say the opening will move the U.S. industry from a theory to reality, paving the way for the construction of many more wind farms that will eventually provide power for many Americans.

Deepwater Wind is building a five-turbine wind farm off Block Island, Rhode Island to power about 17,000 homes. The project costs about $300 million, according to the company.