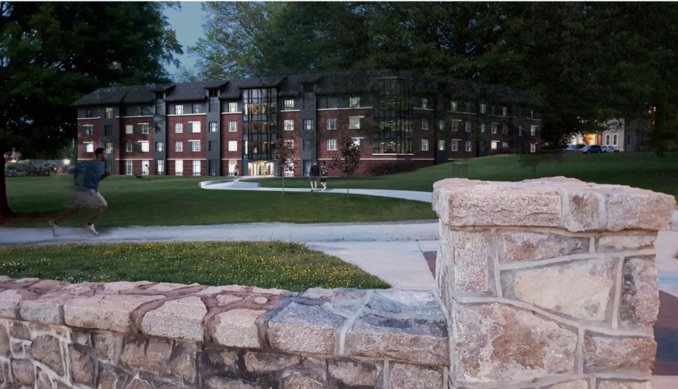 Duke University’s board of trustees has approved the construction of the $34.3 million East Campus Residence Hall.

The board has also approved the design concept for a $25 million overhaul of the university’s Alumni Center.

According to the university’s facility’s management division, East Campus Residence Hall is slated to open in January 2018 and will help house students displaced by planned West Campus dorm renovations and the anticipated future demolition of Jarvis, Epworth and East residence halls.

The architect for the project is Durham-based O’Brien/Atkins. Design plans are targeting silver-level LEED certification.

The total cost of the student housing overhaul could exceed $250 million.

For the Duke Alumni Center, early designs by Centerbrook Architects of Connecticut show that the 46,840 sq. ft. project will involve three buildings. The projects will include renovating the building at 615 Chapel Dr. that was the former location of the Duke Office of News and Communication. A building addition will be demolished and the original building will be restored for the Duke Alumni Association.

The second building, a two-storey structure with 16,900 sq. ft., will accommodate about 58 full-time staff members and temporary work stations for the alumni support services.

A third building will be designed for events and meetings with about 20,200 sq. ft. for the meeting pavilion.