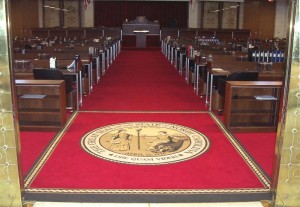 In today’s issue of NewsBreak, the Carolinas AGC  (CAGC) reports the double payment/lien legislation passed the NC State House, in a 101-0 vote. The House sent to the Senate HB 1052 (Mechanics Liens/Payment Bond Reforms), a bill that would help solve problems  concerning double payment issues for contractors and bankruptcy issues that jeopardize  lower-tier specialty contractors. Passage of the bill, which will be considered  in a Senate judiciary committee and then the full Senate, is a top priority of  CAGC.

Senate Bill 42 (Mechanics  Liens, Private Lien Agent), which would take effect April 1 of next year, also  passed the House last week. It next will go to the Senate for concurrence, and  if the Senate concurs, the bill will be enacted. Two House members had been  prepared to run on the House floor on June 21 an amendment which on the  previous day failed in the House Judiciary B Committee on SB 42. The amendment,  which was not offered up on the House floor, said:

“Upon  receipt of notice from a potential lien claimant pursuant to this section, no  action by a contractor shall be effective to prejudice the rights of the  subcontractor without the subcontractor’s written consent.”

Last week, during the judiciary  committee meeting, Matt Bouchard, a Raleigh construction attorney with Lewis  & Roberts and a CAGC member, told the committee that this proposal could  slow up the payment process for everybody, particularly if there were a  disgruntled second- or third-tier subcontractor who refuses to sign a lien  waiver.

Dave Simpson, NC government relations and  Building Division director for CAGC, along with other construction industry  representatives, successfully urged the committee not to have SB 42 take effect  as early as January 1, 2013, saying more time is needed to educate the  construction industry about the complex SB 42. The bill, if approved, would  take effect April 1 of next year, not July 1 as previously proposed.

Also, under the original bill,  lower-tiered subcontractors and suppliers would only be able to recover against  a payment bond for labor and materials provided within to 60 days prior to having  notified the contractor in writing that they were providing labor materials on  the job. Representatives of the  aggregates industry earlier this month offered in a committee meeting an amendment  that would extend that look-back period to 75 days. In addition, the original bill only would  apply to jobs of $10,000 or more. The aggregates representatives offered an  amendment raising that ceiling to $25,000.

In that meeting, CAGC told committee  members that the 60-day threshold was adequate, noting that South Carolina has  no such time period and that most states with related laws only have 20-30 day  look-back periods, with only two having a 60-day look-back period. CAGC also  urged the committee to reduce the threshold from the proposed $25,000 to  $20,000, noting that building contractors have lost millions of dollars in  having to pay twice for the same materials. Â At the same time, CAGC said, because of the  fragile nature of the compromise legislation, CAGC did not want to do anything  that would jeopardize the bill at a time when the NC General Assembly is  winding down its short session.

The Judiciary Subcommittee B voted to  reduce the proposed threshold from $25,000 to $20,000 but to keep the look-back  period to 75 days. Concerning bankruptcy  issues, the proposal would clarify that lower-tiered subcontractors would have the  same ability as contractors to recover on lien claims once a higher-tiered  party files for bankruptcy.

Meantime, CAGC will continue to be  heavily involved with ongoing efforts concerning hidden-lien problems that  title insurer and banking interests are trying to resolve through proposed  legislation that would set up a lien agent notice requirement to perfect a  claim of lien on real property. Under  this process, contractors, subcontractors and suppliers would all have to  notify an independent lien agent of their work on a project in order to make  sure their lien claims took priority over a subsequent buyer’s interest. The  lien agent process would apply to any project larger than $30,000.  Read More.