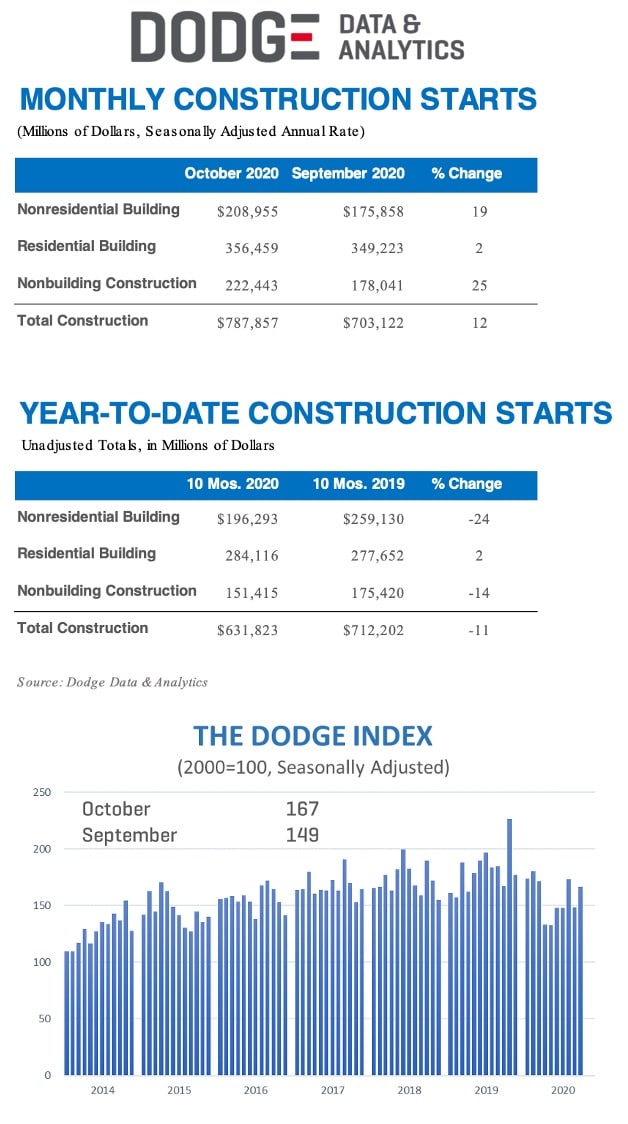 Total construction starts rose 12% in October to a seasonally adjusted annual rate of $787.9 billon. While sizeable, the increase does not erase September’s substantial pullback in starts. All three major categories moved higher over the month, nonbuilding starts rose 25%, nonresidential buildings increased 19%, while residential activity gained 2%. Four of the five regions saw construction starts move higher in October, with the only decline coming in the South Central region.

Through the first 10 months of 2020, total construction starts were 11% lower than the same period of 2019. Nonresidential starts were 24% lower and nonbuilding were down 14%. Residential starts, however, were 2% higher in the first 10 months of this year. For the 12 months ending October 2020, total construction starts were down 6% compared to the previous 12 months. Nonresidential building starts were 17% lower and nonbuilding starts were 7% lower, while residential building starts rose 4% over the 12 months ending October 2020. In October, the Dodge Index rose 12% to 167 (2000=100) from the reading of 149 in September. The Dodge Index was flat on a year-over-year basis, and 8% lower than its pre-pandemic level in February.

“October’s gain was welcome news following the large step back in starts during the previous month,” stated Richard Branch, Chief Economist for Dodge Data & Analytics. “The month’s increase, however, does not mean all is well with the economy and construction sector. The economy lost traction as the stimulus provided by the CARES Act ended. With the next wave of COVID-19 infections looming, the economy will continue to lose steam until more fiscal stimulus is provided and a vaccine has been widely adopted. Until that has occurred, the construction sector will continue to be volatile.”

Nonbuilding construction posted a solid 25% gain in October, increasing to a seasonally adjusted annual rate of $222.4 billion. The gain was driven in large part by a sizeable tunnel project that drove highway and bridge starts 51% higher. The utility/gas plant category rose 41%, while miscellaneous nonbuilding gained 6%. Environmental public works fell 24% over the month.

The largest nonbuilding project to break ground in October was the $3.6 billion Hampton Roads Bridge and Tunnel project in Norfolk VA. Also starting in October was the $1.0 billion Gemini Solar Project in Clark County NV and the $450 million Indiana Crossroads Wind Farm in White County IN.

The largest nonresidential building project to get started in October was the $585 million third phase of the Project Echo Facebook Data Center in Sandston VA. Also getting started during the month was the $400 million Tesla Gigafactory in Austin TX and the $330 million Campus at Horton office project in San Diego CA.

Residential building starts moved 2% higher in October to a seasonally adjusted annual rate of $356.5 billion. The increase in the multifamily sector was robust, with starts rising 62% following a 52% loss the previous month. Single family starts fell 9% in October.

The largest multifamily building to break ground in October was the $386 million Waterview at Greenpoint project in Brooklyn NY. Also starting were a $250 million mixed-use project on 47th Street in New York NY and a $200 million residential tower on High Street in Houston TX.