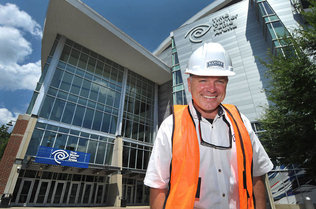 Charlotte-based Ranger Construction is helping to transform Time Warner Cable Arena for the DNC. Owned by veteran Bernie Funck, the company is helping to build the media suites in the arena in which the first two days of official convention events will take place.

When planning for the Democratic National Convention began last year, organizers made diversity a priority in their awarding of contracts, reports the Charlotte Observer.  Convention organizers created a business directory where local companies looking to get a part of the DNC action could list their services. And they made a goal to spend at least one-third of their money with “diversely owned” companies, owned by minorities, women, veterans, people with disabilities and members of the gay community.

Veteran-owned Ranger Construction is helping build the suites were media members will work. And with the convention only a few weeks away, construction is now in full swing. Ranger Construction’s 35-person crew has spent the past three weeks helping transform Time Warner Cable Arena for the first two days of the DNC.  “A lot of people worked to get (the convention) here,” said owner Bernie Funck. “We wanted to be a part of that.”

His team’s job was to transform what are normally luxury suites into media work areas. For Ranger Construction, this entailed removing some of the items from the suites and putting up drywall and framing. Funck said the arena is almost unrecognizable because of all the construction.

Funck said the level of oversight for this project, which included supervision from the Secret Service, has been unlike any he’s experienced. And oversight is not new to Funck, who was in the military for more than 20 years. He said the name Ranger Construction came from his time in the military.

Funck said he has tried to give back to his community through his work at the Carolinas Freedom Foundation, where he chairs the board, and through this project. The next task for Ranger Construction is to outfit the suites for news organizations such as NBC and CNN.

A team of diverse contractors – Rodgers Builders, Hunt Construction and H.J. Russell and Co. are overseeing the work of hundreds of subcontractors as construction managers for the temporary remodel and restoration of the downtown arena.   Read More.