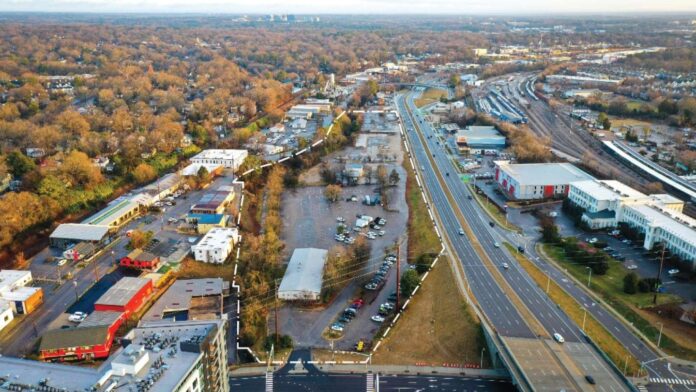 City of Raleigh staff is developing plans for a new park north of downtown – the Devereux Meadow Park project which is currently at the concept design phase.

The project site is a City of Raleigh-owned property currently used as a city maintenance facility that will be converted into a natural and passive urban park. The current concept plan shows pathways, plazas, natural spaces, extensive native landscapes, improvements to the Pigeon House Branch stream, and newly constructed wetlands.

The proposed location is a 14-acre site at the corner of Capital Boulevard and Peace Street. Formerly the location of the Devereux Meadow baseball stadium, it is now as a city maintenance facility.

The vision is to create a passive park composed of walking trails, open meadows, native plantings, and stormwater wetlands along with opportunities for public art and environmental and historical interpretation of the site.  A key part of the proposed park design is the restoration of the existing Pigeon House Branch, including re-establishing a more natural flow to this waterway. Another important component is the first phase of a new greenway connecting Crabtree Creek Greenway to Downtown Raleigh and Dix Park.

Most of this site is in the floodplain and contains areas of subsurface contamination. This contamination warrants environmental remediation before becoming a public park. Between 2017 and 2020, the project consultant, Tetra Tech Engineering, conducted environmental site analysis and constraints evaluations which are used to inform project planning and design.

The current conceptual and schematic design stage was initiated in December 2020. This stage includes the production of conceptual design alternatives vetted through internal and external engagement with city staff, local stakeholders and the public, the Parks Board, and the City Council. At this time, funding for the construction of this proposed park has not been allocated.

The vision for the park includes:

The first phase of a greenway connection from Crabtree Creek Greenway to Downtown Raleigh.

Because the name “Devereux” can be traced back to John Devereux, Jr., the owner of several North Carolina plantations during the 1800’s and Greenway Advisory Board (PRGAB) has recommended the Devereux Meadow Park Project be renamed.

At the July 2022 PRGAB meeting, the board recommended the following three new names for the future park:

PRCR has created an online survey for public to vote on the new names. The detailed concept plan and results of the survey will be presented to the PRGAB at the Sept. 15 meeting.