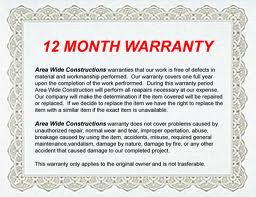 Perhaps the most common misconception held by even sophisticated contractors and subcontractors is that their warranty obligations expire one year after the completion of the project. This mistaken assumption most likely stems from a confusion of their contractual warranty obligations and their separate but related one-year “duty to correct” defective work.

Most form contract documents do make reference to a one-year correction, or “call back” period. Correction periods generally are intended to motivate contractors to return and repair defective work after final payment and demobilization from the site. In order to invoke a “correction” obligation, an owner generally need not prove why an element of construction failed, but only that it did fail. Put differently, it is not the owner’s burden to prove the cause of the defect that appears during the one-year period, but only that it was not due to owner abuse or neglect.

In contrast to “correction periods,” most “warranties” found in form construction contracts contain no time limitation on a contractor’s or subcontractor’s warranty obligations. Indeed, a review of the major contract document series failed to uncover any form agreement that attempts to establish an exclusive warranty of only one year in duration. Consequently, if a contractor or subcontractor desires to warrant their work for a time period shorter than that set forth in the applicable statutory period (6 years or 8 years under North or South Carolina law, respectively), the warranty will have to be “home grown.”

The first hurdle is establishing that the warranty sets forth the owner’s exclusive recourse for post-occupancy defects. In essence, a “warranty” is just one of many representations and agreements interspersed throughout the typical construction contract. Absent an agreement between the parties to the contrary, most courts will view the owner’s claim for breach of warranty as but one of several avenues of recovery for construction defects. Therefore, perhaps the simplest way to establish the exclusiveness of a warranty provision is to state that the warranty is, indeed, “exclusive.”

In addition to establishing the exclusivity of the one-year warranty amidst the many contractual provisions that can potentially give rise to claims for defective work, a contractor or subcontractor must also dispose of those obligations implied by law, including, in the Carolinas, the implied warranty that the structure will be free from hidden defects in its major systems. As with other warranties, these implied warranties may be disclaimed. However, courts generally will construe the disclaimer as narrowly as possible and in a light most favorable to the owner. Thus, in order effectively to disclaim these implied warranties, the disclaimer must be made in both conspicuous and unambiguous fashion.