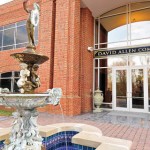 The David Allen Co. has looked beyond the beautiful marble, granite, tile and terrazzo it promotes to the roof of the company’s headquarters. The Raleigh-based contractor upgraded its 65,000 square foot facility, built in 2002, by installing one of the largest photovoltaic solar arrays in the Triangle.  It is in every sense of the word a green project. The 700 solar modules covering 23,000 square feet of rooftop produce enough electricity to offset over 35% of the company’s energy use. The system also produces renewable energy credits that the company will sell on the open market to produce additional revenue. With the energy savings and tax credits, the system will pay for itself in less than five years, according to Chief Financial Officer Art Odom.

Odom says he first started considering the project last May. “We were exploring overhead reduction and investment opportunities.” That led him to discussions with PeakSolar Investors LLC in Raleigh, which designed the system installed by Barnhill Contracting Co.

But first, Odom had to convince CEO Robert Roberson that the numbers would work. “I was very much a skeptic,” Roberson says. “We are environmentally sensitive, but most environmental endeavors come with a price tag, not a dividend. Although it looked too good to be true, after confirming the numbers and with Art’s persuasion, I was on board.”

The deal came together in September, but there was one hitch. “There were tax credits involved and the construction had to be done before the end of the year. They’ve extended those credits, but at the time we didn’t know that was going to happen.”

Barnhill completed the project on time, and David Allen Company started operating the system Dec. 30, 2010. As a result of the tax credit, about 60% of the company’s total investment was recovered.