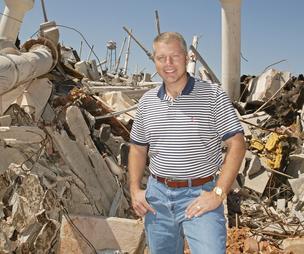 The Triangle Business Journal reported D.H. Griffin Wrecking Co. is selling most of its construction work pipeline to the Balfour Beatty construction firm. “It was good timing for us to sell part of our interests in these projects to Balfour Beatty,” said President David Griffin, Jr. “I couldn’t be happier in the way it’s all worked out.”

Other employees, Griffin says, will be going to work with Dave Hurley, the former president of D.H. Griffin Construction who is planning to start his own company focused on infrastructure-related work. Still others have been offered jobs with one of the 11 other operating companies under the D.H. Griffin Companies umbrella. Most of those companies are based in Greensboro. The company will still keep its general contractor’s license and pursue “select projects” within the D.H. Griffin company footprint, Griffin says.

“Balfour Beatty has been an excellent joint venture partner over the last 10 to 15 years, and we’ve done hundreds of millions of work with them,” Griffin noted. “In this industry, you pick your partners and they were the natural fit to carry on. They already know everything about these projects, and I know they’ll be finished up properly. I think all of our clients will be happy also.”

Griffin would not specify which projects in the company’s pipeline were being sold to Balfour Beatty, but the two companies are currently building together the 175,000-square-foot Student Union building on the campus of N.C. A&T State University in Greensboro. Balfour Beatty is an international general contracting firm that ranked No. 1 among the largest construction firms in North Carolina with $794.8 million in gross billings across the state in 2011. Balfour Beatty employs about 70 people at its office in Raleigh. Read More.