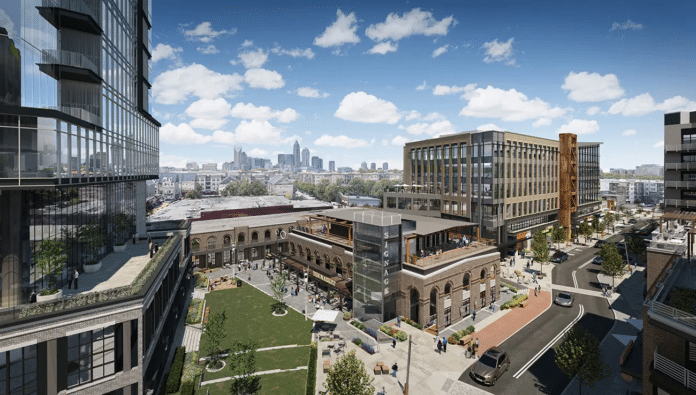 Construction is scheduled to start in the fall on the 12-acre development with nearly 400 apartments, a boutique hotel, as well as retail and restaurants. The developer has paid about $50 million for the former Eastwood Mall site.

“Our primary goal throughout the design process is for this project to be a natural extension of the surrounding neighborhood,” said Bobby Speir, senior vice-president of Mixed-Use Investment with Crosland Southeast. “Our hope is that the finished product will feel like a nod to the past with a vision for the future.”

The development will occupy 400,000 sq. ft. at the Central Square property near the intersection of Central and Pecan. Most of the businesses at the shopping center have closed, but a few remain.

The developers say they want to create a pedestrian-friendly area with green spaces. Two of the historic brick mill buildings will remain and be incorporated into the new development.

“By creating gems out of these diamonds in the rough buildings, we have established them as the centerpiece of the project and designed the remainder of the buildings and green spaces around these crown jewels,” Speir said.

Crosland Southeast says they’ve hosted meetings and town halls with neighbors to make sure they keep much of the neighborhood’s character, Fox46 reports.

The project’s first phase is expected to be completed by the Spring, 2014.