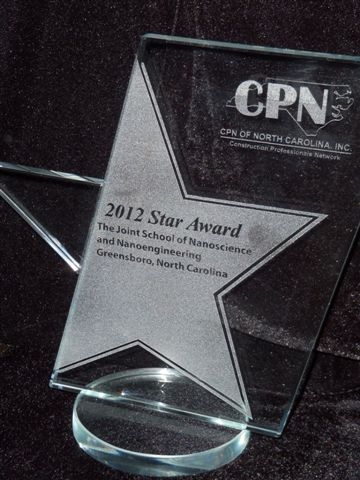 CPN of NC presented the 2012 Star Awards for outstanding construction projects completed in North Carolina at the annual conference held in Hilton Head, SC. Two awards were given – one for projects under $20 million and another award for projects over $20 million.

The CPN Star Award is a symbol of excellence in construction and the selection is based on the merits and challenges of the project. In presenting the Star Awards, CPN honors the general contractor along with other member who participated in completing the projects.

The 2012 Star Award for a project under $20 million was presented to the International Civil Rights Center & Museum, Greensboro, NC.  CPN member Weaver Cooke Construction, Greensboro, was recognized as the the general contractor on the project.

The 2012 Star Award for a project over $20 million was presented to The Joint School of Nanoscience and Nanoengineering, Greensboro, NC. CPN member Samet Corporation, Greensboro, was the general contractor on the project.

Both projects have contributed to the Piedmont Triad community. The projects employed local people during construction with a large percentage being minority. The International Civil Rights Center & Museum has historical significance. The Joint School of Nanoscience and Nanoengineering building is a collaboration of North Carollina A & T State University and the University of North Carolina at Greensboro,  both local universities.  “The high tech research done there is intended to attract public- private partnerships and become an economic engine to drive the community and the state into the 21 century.” said Fred Patrick, Chair of the CPN Star Awards Committee.

CPN of North Carolina, Inc. is a statewide, non-profit organization of business and professional leaders who are involved with design, construction and related services. Read More.