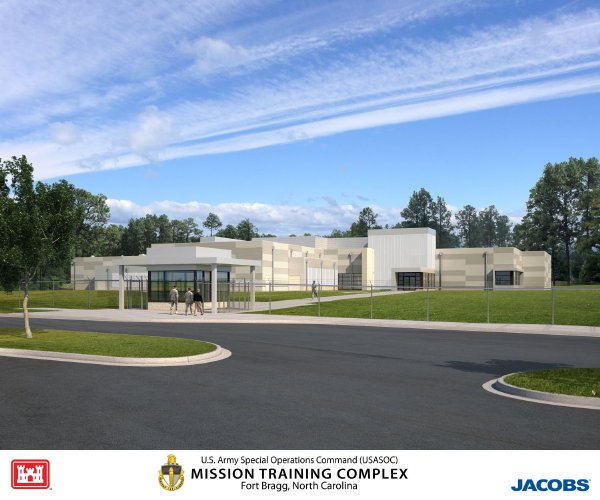 Construction projects at Fort Bragg totaling more than $39 million have been awarded to contractors, the Army Corps of Engineers announced. The projects went to contractors in Raleigh, Atlanta and Dallas, according to an article in the Fayetteville Observer. The projects include:

A $17.5 million mission training complex to be built by SFL+A Architects of Raleigh,

An $11.1 million dining facility to be built by H-S Joint Venture of Atlanta and

A $10.4 million maintenance facility to be built by Balfour Beatty Construction of Dallas.

All three projects will incorporate environmentally friendly features, the Corps of Engineers said.

The mission training complex, formerly known as a battle command training center, will replace an aging facility on Butner Road that has been supplemented in recent years with modular trailers. The facility is used to train units preparing for deployments. The 46,980-square-foot complex will simulate battlefield conditions within a classroom setting using the same technology that is currently used overseas as well as simulators, virtual trainers and gaming systems, according to the release. The project is scheduled to be completed in September 2013.

The dining facility will serve the 82nd Airborne Division’s 3rd Brigade Combat Team. The 26,500-square-foot facility will be able to provide meals for 1,300 personnel and is scheduled to be completed in June 2013, according to the release.

The maintenance facility will house tactical equipment for the 108th Air Defense Artillery Brigade, according to the Corps of Engineers. The facility will include an 18,000-square-foot vehicle maintenance shop, storage for unmanned aerial vehicles and parking. It is scheduled to be completed in June 2013.