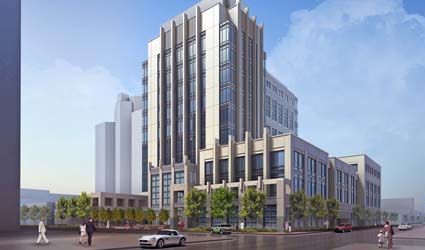 The Department of Labor recognized the successful completion of a worksite safety partnership with Barnhill Contracting Co.and Balfour Beatty Construction. The officials with the Labor Department and with the companies signed the safety partnership agreement for the construction of the new Wake County Justice Center. Such partnerships allow for better use of the department’s Occupational  Safety and Health Division for innovation in safety management. The partnerships also aim to reduce worksite accidents by improving the overall effectiveness of existing safety and health programs.

Labor Commissioner Cherie Berry presented partnership completion certificates to officials with both companies on Thursday, Nov. 29. “I know that our folks have benefitted from being right there—hands on—on the site with you,” Commissioner Berry said. “It makes us better with what we do in other areas of the state and with other companies. I am so proud and honored that you have allowed all of us to be a part of it. We look forward to the same kind of relationship going forward.”

More than 950 workers were employed at some point on the project during the partnership period. At the height of construction, more than 400 employees were on the site at one time. The partnership was completed with no fatalities and, at one point, reached 605,000 hours with no lost time accidents.

“We achieved our goals for injury rates and were fortunate to celebrate many milestones along the way,” said Drew Rintelmann of Barnhill Contracting.

The center will contain more than 580,000 square feet of space within an 11-story structure. The building will house 20 new courtrooms, with associated support space, and will have the capacity to add more new courtrooms in the future. It will also provide public meeting space for the Board of CountyCommissioners and administrative space for the County Manager, County Attorney, Finance and Budget Operations, Register of Deeds, Revenue/Assessor, and various other support needs. The projected occupancy for the center is July 2013.

Rintelmann credited the partnership with giving their companies the opportunity to improve. He said the partnership at the Justice Cente rhad been instrumental in making for a stronger company safety and health programs for both companies and in strengthening the companies’ relationship with the Labor Department.

“This partnership, especially, has given us the opportunity to strengthen that relationship to where both of our companies have been considered for some pretty prestigious opportunities with the Labor Department,” Rintelmann said.

The Labor Department’s safety partnerships with contractors reach every employer on the worksite. A particular emphasis of the partnership agreement is involving all subcontractors on the site. The contractors and subcontractors prepared detailed written prejob and prephase safety and health planning documents. They trained affected employees on the identified hazards and controls.

“Working with OSH on partnerships is a win for all parties involved,” said Jeff Beam, project executive with Balfour Beatty. “It links the subcontractors and contractor to OSH expertise to ensure a safer working environment for all employees on the jobsite.”

Management of safety and health depends on a thorough understanding of the potentially hazardous situations to which project workers may be exposed and the ability to recognize and correct hazards as they arise. The project’s safety committee included management and workers from the subcontractors on the site. The safety committee reviewed the findings and recommendations of inspections at its monthly safety and health meetings. Employees of the OSH Division participated in quarterly inspections of the worksite.

“The ongoing support and guidance we received from OSHwas not only beneficial to the management of the project but also to the trade workers,” said Shelley Godwin, operations director with Balfour Beatty. Read More.